Between 1911 and 1922, the Potomac River was repeatedly dredged by the United States Army Corps of Engineers to deepen the channel and alleviate flooding. Dredging widened the distance between Analostan/Theodore Roosevelt Island and Columbia Island (so that the "Virginia Channel" west of Analostan/Roosevelt Island would not flood easily). Dredged material was piled high on Columbia Island, helping to build it higher, lengthen and broaden it, and give it its current shape. The new island received its name about 1918 from an unnamed engineer working for the District of Columbia.

An anonymous Corps of Engineers officer named the waterway between Columbia Island and Virginia the "Boundary Channel".

Boundary Channel marks the original Virginia shoreline. It separates Columbia Island to the east from Virginia in the west and south, and is roughly a mile long. The channel is part of the Potomac River. In 1936, Boundary Channel was 100 to 200 feet (30 to 61 m) in width and 4 to 6 feet (1.2 to 1.8 m) in depth. No lagoon existed at this time.

Broundary Channel was changed again after ground was broken for The Pentagon on September 11, 1941. The Pentagon was being built on land just south of the Boundary Channel. But the ground to the northwest, north, northeast, and east of the building site was so low that, for a time, the Corps of Engineers considered building a levee to protect it from floods. But General Brehon B. Somervell, the Army officer in charge of the Pentagon's construction, decided instead to raise the ground by at least 8 feet (2.4 m) to 18 feet (5.5 m) or more above the average water level. Boundary Channel was dredged and slightly widened in order to help provide this fill material.

Due to silting and other issues, Boundary Channel is approximately 100 feet (30 m) wide as of 2013 (although the width varies). It is also quite shallow. 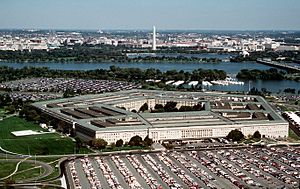 Aerial view of the Columbia Island Marina and the Pentagon Lagoon in relationship to The Pentagon and the Potomac River. 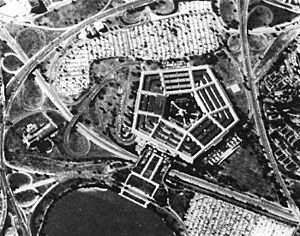 Corona image of The Pentagon and part of the Lagoon, 25 September 1967

During construction of the Pentagon in 1941, the U.S. Army not only needed a source of fill material to raise the land around the Pentagon, but also needed a way for river barges to deliver concrete, gravel, and sand to the construction site. With unused Columbia Island nearby, the Corps of Engineers quickly removed a portion of the island as well as dredged the bottom of the lagoon for this fill material. The Army also constructed a dike inland on the Virginia shoreline. The earth behind this dike was excavated to a depth 14 feet (4.3 m) below the Potomac River's average high tide. On what was to be the new shoreline, the Army and its contractors built cement plants and marshalling areas for the deposit of sand and gravel. The dike was then breached (and removed by dredge), allowing barges and other ships to deliver construction materials quickly and cheaply to the building site. More than 1,000,000 cubic yards (760,000 m3) of earth and riverbottom were excavated, and Boundary Channel's lagoon enlarged by 30 acres (120,000 m2).

The Pentagon Lagoon was named by The Washington Post after a murder there in September 1944.

For more details, see Construction of the Virginia approaches to Arlington Memorial Bridge

All content from Kiddle encyclopedia articles (including the article images and facts) can be freely used under Attribution-ShareAlike license, unless stated otherwise. Cite this article:
Boundary Channel Facts for Kids. Kiddle Encyclopedia.