According to the United States Census Bureau, the town has a total area of 0.8 square miles (2.1 km2), all of it land.

There were 134 households, out of which 23.9% had children under the age of 18 living with them, 58.2% were married couples living together, 11.9% had a female householder with no husband present, and 28.4% were non-families. 26.9% of all households were made up of individuals, and 16.4% had someone living alone who was 65 years of age or older. The average household size was 2.40 and the average family size was 2.88. 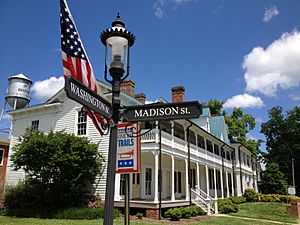 Boyd Tavern in Boydton, built 1790 and open for tours 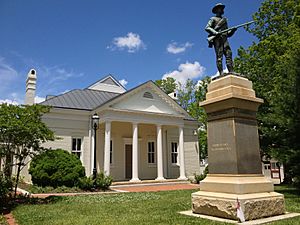 Boydton was founded in 1812 and is the original home of Randolph-Macon College, then very small, and which barely stayed in operation during the American Civil War as its focus abruptly changed from a Methodist seminary to military cadet training. In the difficult post-war Reconstruction years the trustees relocated the remote and struggling school to its present location in Ashland, Virginia, closer to railroad service.

Boydton/Clarksville was the terminus of the 19th-century "Boydton Plank Road" leading to Petersburg. This 80-mile (130-km) road was covered with wooden planks, making it superior to other roads which were just unpaved dirt and rutted.

The Boyd's Tavern is an 18th-century structure originally operated by merchant Alexander Boyd, a Scottish immigrant, which in recent years has been restored by his descendants and opened to public tours.

In 1952 the large Kerr Lake was created nearby, drawing many boaters, campers, and fishermen to the local area (see Clarksville, Virginia).

In addition to Boyd's Tavern, the Boydton Historic District and the Mecklenburg County Courthouse are listed on the National Register of Historic Places in 2002.

The climate in this area is characterized by hot, humid summers and generally mild to cool winters. According to the Köppen Climate Classification system, Boydton has a humid subtropical climate, abbreviated "Cfa" on climate maps.

All content from Kiddle encyclopedia articles (including the article images and facts) can be freely used under Attribution-ShareAlike license, unless stated otherwise. Cite this article:
Boydton, Virginia Facts for Kids. Kiddle Encyclopedia.