Bradshaw is a village of the unparished area of South Turton in the Metropolitan Borough of Bolton in Greater Manchester, England. It gives its name to the larger Bradshaw electoral ward, which includes Harwood. Historically a part of Lancashire, Bradshaw lies on the southern edge of the West Pennine Moors.

The toponymy of Bradshaw is derived from the Old English adjective Brad from which our modern word broad is evolved, and the Old English word sceaga – anglicised to shaw – a copse. The two elements together mean a broad copse. In early deeds and documents of the 13th Century the name is spelt Bradeshaye and later Bradshaigh.

The Manor of Bradshaw

Henry Bradshaw held land in the area in 1235, and the Bradshaws were an important Lancashire family in the late 1500s and early 1600s, especially during the movement against the King before the Civil War. John Bradshaw died in 1542 holding the Manor of Bradshaw. In 1694 the Manor and Lordship of Bradshaw was sold by another John Bradshaw to Henry Bradshaw of Marple Hall. The estate later descended to the Isherwood family. 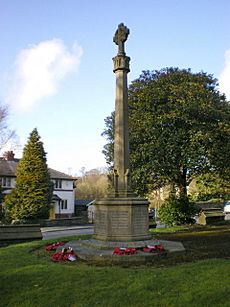 Bradshaw War Memorial is located within the grounds of St Maxentius' Churchyard. It commemorates the residents of Bradshaw who were killed in the First and Second World Wars.

The inscription on one of the panels of the memorial reads:

To The Glory Of God And In Memory Of The Men Of Bradshaw Who Died For Their Country In The Great War 1914–1918.

On the base there is a further inscription for the Second World War:

Also In Loving Remembrance Of The Men Of This Parish Who Gave Their Lives In The War Of 1939–1945.

Other panels and the base has the names of all those killed in the two world wars. The churchyard also contains seven war graves, six from the First World War and one from the Second World War.

Bradshaw is famous for its "tower without a church and a church without a tower". This refers to St. Maxentius's Church in Bradshaw. This church was originally one of the earliest chapels of ease for Bolton Parish Church. The 16th-century tower is all that is left of the original chapel of ease. The present 1872 church building is near, but separate from the tower.

All content from Kiddle encyclopedia articles (including the article images and facts) can be freely used under Attribution-ShareAlike license, unless stated otherwise. Cite this article:
Bradshaw, Greater Manchester Facts for Kids. Kiddle Encyclopedia.