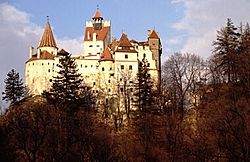 Bran Castle (German: Törzburg; Hungarian: Törcsvár) is a castle near Bran in the area of Braşov, Romania. It is a national monument and landmark in Romania. The fortress lies on the border between Transylvania and Wallachia, on Highway 73. It is mostly known as "Dracula's Castle".

The castle was used as the home of Dracula in Bram Stoker's Dracula.

All content from Kiddle encyclopedia articles (including the article images and facts) can be freely used under Attribution-ShareAlike license, unless stated otherwise. Cite this article:
Bran Castle Facts for Kids. Kiddle Encyclopedia.