Branford Center is a neighborhood and census-designated place (CDP) in the town of Branford, Connecticut, United States. The CDP encompasses the traditional town center area (roughly the area bounded by U.S. Route 1, the Amtrak railroad tracks, and the Branford River) and the area known as Branford Point (the portion of the CDP south of the railroad tracks). The population of the CDP (including Branford Point) was 5,819 at the 2010 census. 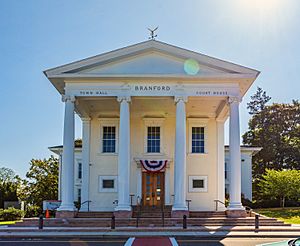 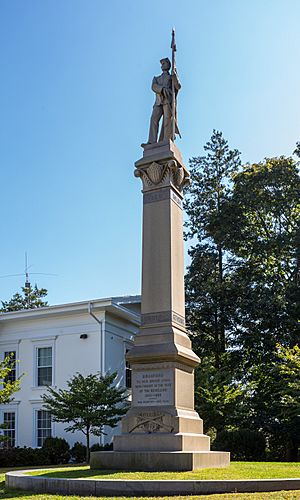 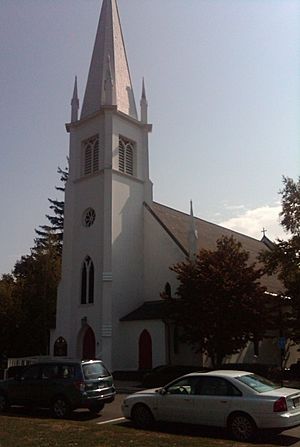 The Branford Center Historic District was listed on the U.S. National Register of Historic Places in 1987. The historic district represents the area of the traditional town center and excludes Branford Point. The designated portion is an irregularly-shaped 250-acre (100 ha) area that includes 557 contributing buildings out of a total of 706 buildings in the district, including garages, carriage houses, and other structures. It includes two other contributing sites: the Center Cemetery and the Saint Mary's Roman Catholic Cemetery. The district boundaries were drawn to exclude modern construction such as the Branford High School and to exclude older buildings that did not retain their "historic architectural integrity."

Industry is represented in buildings of the Malleable Iron Fittings Company and the Atlantic Wire Company. Government buildings include the Branford Town Hall, from 1857, a Greek Revival building. Religious institution buildings in the district include:

As defined by the U.S. Census Bureau, the boundaries of the Center extend from the Branford River north along Short Beach Road (Connecticut Route 142) to U.S. Route 1 (West Main Street), then northeast along Route 1 (becoming North Main Street) to Cedar Street, north on Cedar Street to Interstate 95, and east (northbound) on I-95 to the Branford River, which forms the entire southeastern boundary of the CDP.

The green is typical of a traditional New England town, and serves as Branford's social, commercial, and governmental nerve center. It is home to many small stores, restaurants, and coffee houses, (including perennial favorites like Ashley's Ice Cream and Common Grounds) and hosts concerts and other events, such as the annual Branford Festival. The Branford Green is lined with churches as well as the town hall; other government facilities (such as the Branford Police Department and United States Post Office), are located on nearby Harrison Avenue. A memorial to Branford's contributions during the American Civil War is to the right of the town hall. The historic Blackstone Library is situated in the western portion of the Center. It also contains five schools: St. Mary School (grades K-8), John B. Sliney (grades K-4), Mary T. Murphy, Mary Tisko and Branford High School (grades 9-12).

All content from Kiddle encyclopedia articles (including the article images and facts) can be freely used under Attribution-ShareAlike license, unless stated otherwise. Cite this article:
Branford Center, Connecticut Facts for Kids. Kiddle Encyclopedia.