Brettenham is a village and civil parish in the Babergh district of Suffolk, England. In 2005 it had a population of 270, increasing to 353 at the 2011 Census. 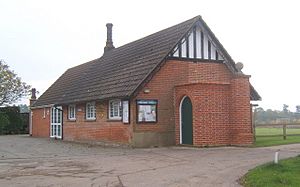 Almost the entire built-up area is defined as a conservation area, and the parish also contains some ancient woodland at Ram's Wood. The village is home to independent prep school, Old Buckenham Hall.

The ancient village is recorded about 1086 in Little Domesday as being within the hundred of Cosford.

The parish became part of Babergh district when it was formed on 1 April 1974 by the merger of Cosford Rural District (1882-1974) with other units of government.

All content from Kiddle encyclopedia articles (including the article images and facts) can be freely used under Attribution-ShareAlike license, unless stated otherwise. Cite this article:
Brettenham Facts for Kids. Kiddle Encyclopedia.