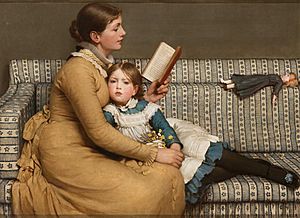 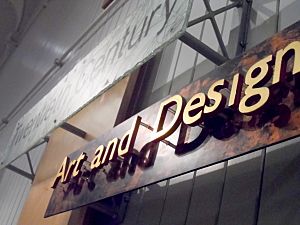 Signage in the main gallery

Brighton Museum & Art Gallery is a municipally-owned public museum and art gallery in the city of Brighton and Hove in the South East of England. It is part of the "Royal Pavilion & Museums, Brighton and Hove". It is free for local residents but charges £5 per non-resident.

The building which houses the collection is part of the Royal Pavilion Estate and was originally built for the Prince of Wales, later George IV and completed in 1805. It was initially intended as a tennis court but had never been finished, and later served as cavalry barracks.

After the death of George IV in 1830, his successor King William IV also stayed in the Pavilion on his visits to Brighton. However, after Queen Victoria's last visit to Brighton in 1845, the Government planned to sell the building and grounds. The Brighton Commissioners and the Brighton Vestry successfully petitioned the government to sell the Pavilion to the town for £53,000 in 1850 under the Brighton Improvement (Purchase of the Royal Pavilion and Grounds) Act 1850.

In September 1851 it was announced that part of the Pavilion was to be appropriated for annual art exhibitions and two months later the first of these was held. The local talent to which it was confined included Frederick Nash and Copley Fielding. The room devoted to the exhibition was the original South Gallery, now the First Conference Room, but later the exhibitions even spread to the Great Kitchen.

The stable building of the Pavilion estate, adjacent to the current museum premises, was used as a museum as early as 1856. It is now the site of the Brighton Dome – a performing arts venue.

The museum is part of the Royal Pavilion & Museums, Brighton & Hove, comprising;

The Decorative Art, Natural Sciences and World Art collections are Designated collections which means they have been identified by the Museums, Libraries & Archives Council as collections of national and international importance (in a non-national museum service)