Kids Encyclopedia Facts
For the Parish in Northumberland, see Brinkburn.

Brinkburn Priory was a medieval monastery built on a bend of the River Coquet, some 4 miles (6 km) east of Rothbury, Northumberland, England. Little survives of the structures erected by the monks apart from the Priory Church, which is a grade I listed building in the care of English Heritage.

It was founded by William Bertram, Baron of Mitford, in the reign of Henry I as an Augustinian priory. The exact date is not known but cannot have been later than 1135, as Henry died that year. About 1180 or so, Brinkburn became an independent house, and the building of the monastic church was commenced. The architectural style has been described as "transitional" (i.e. between Norman and Gothic).

Although the Priory acquired lands in Northumberland and Durham over the years it was never particularly wealthy. Little is known of the early history of the priory, although it is known that it survived some difficult times. In fact, as late as 1419 it was raided and robbed.

Brinkburn Priory was dissolved in 1536 after Parliament enacted the Dissolution of the Lesser Monasteries Act. The "lesser monasteries" were those with an income of less than £200 per annum, and Brinkburn fell into this category as in 1535 the priory's value had been recorded as £69 in the Valor Ecclesiasticus. After the dissolution the estate was mainly owned by the Fenwick family and in the late 16th century they built a manor house on the ruins of the Priory buildings and adjacent to the Priory Church.

Services continued to be held at Brinkburn and the church was retained in a fair state of repair till the end of the 16th century. In 1602 it was reported to be in a state of decay, and at some point before 1700 the roof had collapsed and regular services were abandoned. 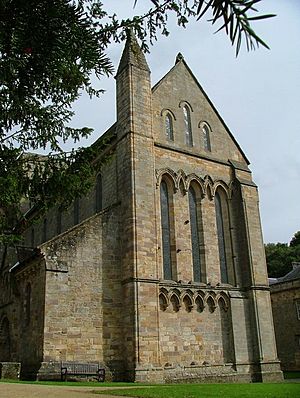 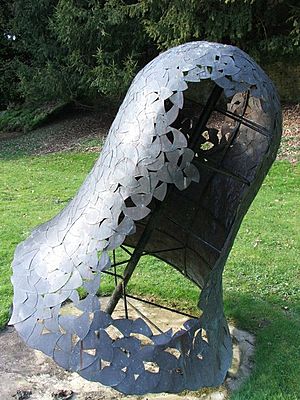 In the 1750s Thomas Sharp, Archdeacon of Northumberland, tried to effect repairs to the ruin. Although there was considerable support for the project, work was called off after a dispute between the owner William Fenwick and the Vicar of Felton.

In the 19th century the Cadogan family, owners of Brinkburn, revived the plans for the restoration of the church and work began in 1858. The roof was completed in the space of a year, and the stained glass windows had been inserted by 1864. The church, however, was not furnished until 1868. Brinkburn Priory today is a sympathetic 19th-century restoration of the mediæval original.

The tombstone of Prior William, Bishop of Durham (died 1484) was found during the reconstruction, as was the original altar stone with five crosses. The latter is still preserved along with an ancient font.

Religious services are still occasionally held here. It is also a venue for concerts, notably the Brinkburn Festival which is directed by Paul McCreesh. However, Brinkburn Priory today is usually a peaceful and tranquil place.

The manor house, which utilises part of the vaulted undercroft to the monks' dining hall, presents a nineteenth-century appearance. It is a grade II* listed building.

Brinkburn Mill, once part of the Priory precinct, was rebuilt in the nineteenth century. It was refurbished in 1990 by the Landmark Trust.

The locally renowned "Brinkburn" on Brinkburn Road, Darlington is also part of the original estate.

All content from Kiddle encyclopedia articles (including the article images and facts) can be freely used under Attribution-ShareAlike license, unless stated otherwise. Cite this article:
Brinkburn Priory Facts for Kids. Kiddle Encyclopedia.