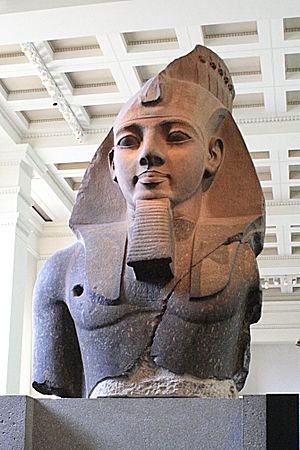 The Department of Ancient Egypt and Sudan is a department forming an historic part of the British Museum, with Its more than 100,000 pieces making it the largest and most comprehensive collection of Egyptian antiquities outside the Egyptian Museum in Cairo.

Egyptian antiquities have formed part of the British Museum collection ever since its foundation in 1753 after receiving 160 Egyptian objects from Sir Hans Sloane. After the defeat of the French forces under Napoleon at the Battle of the Nile in 1798, the Egyptian antiquities collected were confiscated by the British army and presented to the British Museum in 1803. These works, which included the famed Rosetta Stone, were the first important group of large sculptures to be acquired by the Museum. Thereafter, the UK appointed Henry Salt as consul in Egypt who amassed a huge collection of antiquities, some of which were assembled and transported with great ingenuity by the famous Italian explorer Giovanni Belzoni. Most of the antiquities Salt collected were purchased by the British Museum and the Musée du Louvre.

By 1866 the collection consisted of some 10,000 objects. Antiquities from excavations started to come to the museum in the latter part of the 19th century as a result of the work of the Egypt Exploration Fund under the efforts of E.A. Wallis Budge. Over the years more than 11,000 objects came from this source, including pieces from Amarna, Bubastis and Deir el-Bahari. Other organisations and individuals also excavated and donated objects to the British Museum, including Flinders Petrie's Egypt Research Account and the British School of Archaeology in Egypt, as well as the Oxford University Expedition to Kawa and Faras in Sudan. 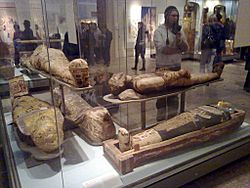 Rooms 62 to 63: Mummies on display in the Egyptian Death and Afterlife galleries

Active support by the museum for excavations in Egypt continued to result in important acquisitions throughout the 20th century until changes in antiquities laws in Egypt led to the suspension of policies allowing finds to be exported, although divisions still continue in Sudan. The British Museum conducted its own excavations in Egypt where it received divisions of finds, including Asyut (1907), Mostagedda and Matmar (1920s), Ashmunein (1980s) and sites in Sudan such as Soba, Kawa and the Northern Dongola Reach (1990s). The size of the Egyptian collections now stand at over 110,000 objects.

In autumn 2001 the eight million objects forming the Museum's permanent collection were further expanded by the addition of six million objects from the Wendorf Collection of Egyptian and Sudanese Prehistory. These were donated by Professor Fred Wendorf of Southern Methodist University in Texas, and comprise the entire collection of artefacts and environmental remains from his excavations at Prehistoric sites in the Sahara Desert between 1963 and 1997. Other fieldwork collections have recently come from Dietrich and Rosemarie Klemm (University of Munich) and William Adams (University of Kentucky).

The seven permanent Egyptian galleries at the British Museum, which include its largest exhibition space (Room 4, for monumental sculpture), can display only 4% of its Egyptian holdings. The second-floor galleries have a selection of the museum's collection of 140 mummies and coffins, the largest outside Cairo. A high proportion of the collection comes from tombs or contexts associated with the cult of the dead, and it is these pieces, in particular the mummies, that remain among the most eagerly sought after exhibits by visitors to the museum.

Key highlights of the collections include the following:

All content from Kiddle encyclopedia articles (including the article images and facts) can be freely used under Attribution-ShareAlike license, unless stated otherwise. Cite this article:
British Museum Department of Ancient Egypt and Sudan Facts for Kids. Kiddle Encyclopedia.