British Museum Department of Coins and Medals facts for kids 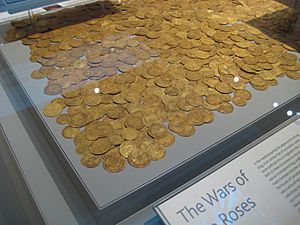 The British Museum Department of Coins and Medals is a department of the British Museum involving the collection, research and exhibition of numismatics, and comprising the largest library of numismatic artefacts in the United Kingdom, including almost one million coins, medals, tokens and other related objects. The collection spans the history of coinage from its origins in the 7th century BC to the present day, and is representative of both Eastern and Western numismatic traditions. 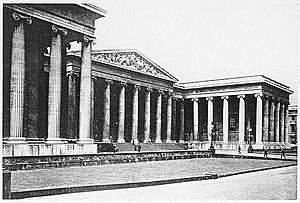 Frontage of the British Museum

Numismatics constituted an important part of the 1753 bequest of Sir Hans Sloane which formed the British Museum's original collection, comprising some 20,000 objects. The collection was incorporated into the Department of Antiquities in 1807, before the establishment of a separate Coins and Medals department in 1860-1.

As in other parts of the museum, the department has been able to expand its collection by purchase, donation and bequest. The department has benefited from the munificence of collectors such as Clayton Mordaunt Cracherode, Sarah Banks, Edward Hawkins, Sir Alexander Cunningham and George Bleazby. A significant strength of the collection are British coins from all ages, which have benefited from the ancient law of Treasure Trove. This has enabled the museum to purchase important hoards of gold and silver coins, many of which were buried during periods of crisis or upheaval. There are approximately 9,000 coins, medals and banknotes on display around the British Museum. More than half of these can be found in the Citi Money Gallery (Gallery 68), while the remainder form part of the permanent displays throughout the museum. Items from the full collection can be seen by the general public in the Study Room by appointment.

The department celebrated its 150th anniversary in 2011.

The Department has a strong research history, which underpins publications (see, for example, the British Museum Catalogues of Coins), exhibitions and other activities.

Members of the Department

In addition to being numismatists, staff of the department have also been distinguished linguists, historians, archaeologists, art historians, classicists, medievalists, orientalists, and authors:

Keepers (Head) of the Department

All content from Kiddle encyclopedia articles (including the article images and facts) can be freely used under Attribution-ShareAlike license, unless stated otherwise. Cite this article:
British Museum Department of Coins and Medals Facts for Kids. Kiddle Encyclopedia.