Broad Run is a tributary of Little Muncy Creek in Lycoming County, Pennsylvania, in the United States. It is approximately 3.7 miles (6.0 km) long and flows through Moreland Township. The watershed of the stream has an area of 2.94 square miles (7.6 km2). At least one bridge has been constructed over the stream, carrying State Route 2067. Broad Run is classified as a Coldwater Fishery. 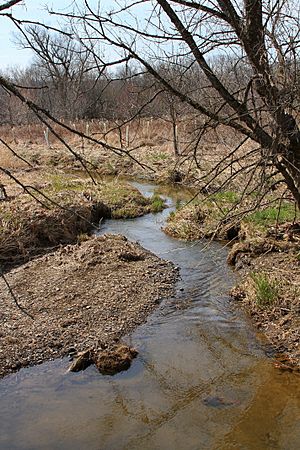 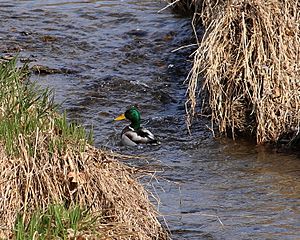 A duck in Broad Run

The watershed of Broad Run has an area of 2.94 square miles (7.6 km2). The stream is entirely within the United States Geological Survey quadrangle of Hughesville. Its mouth is located within 1 mile (1.6 km) of Moreland.

Broad Run is classified as a Coldwater Fishery.

In 2016, XTO Energy was issued an Erosion and Sediment Control Permit for which one of the receiving waterbodies was Broad Run.

All content from Kiddle encyclopedia articles (including the article images and facts) can be freely used under Attribution-ShareAlike license, unless stated otherwise. Cite this article:
Broad Run (Little Muncy Creek tributary) Facts for Kids. Kiddle Encyclopedia.