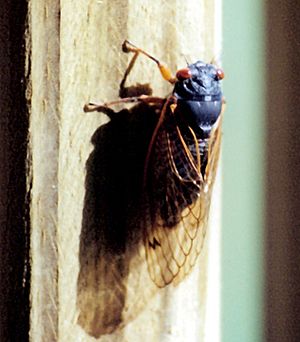 Brood X (Brood 10), the Great Eastern Brood, is one of 15 broods of periodical cicadas that appear regularly throughout the eastern United States. It has the greatest range and concentration of any of the 17-year cicadas.

Every 17 years, Brood X cicadas tunnel en masse to the surface of the ground, lay eggs, and then die off in several weeks. The combination of long dormancy, simultaneous emergence of vast numbers, and short period before the nymphs' burrowing underground to safety, allows the brood to survive even massive predation. 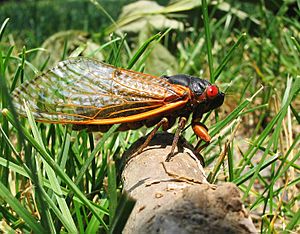 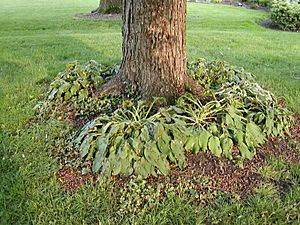 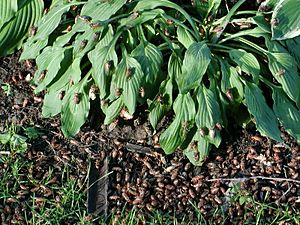 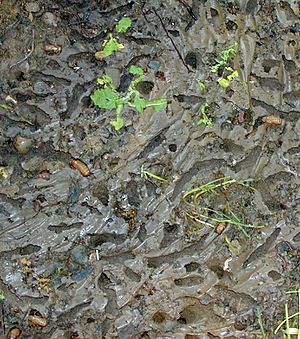 Brood X's most recent appearance was in the spring and early summer of 2004 throughout an area roughly enclosed by Illinois, Michigan, New York and Georgia.

The next appearance of the brood will occur in the summer of 2021, and will emerge in 15 states, which are Delaware, Illinois, Georgia, Indiana, New York, Kentucky, Maryland, North Carolina, New Jersey, Ohio, Pennsylvania, Tennessee, Virginia, West Virginia, Michigan, as well as in Washington D.C.. The following appearance has been predicted to occur in 2038. However, significant numbers of periodical cicadas, believed to be Brood X emergents that were four years early, appeared throughout the brood's range in 2000 and in the Baltimore, Maryland-Washington, D.C., area in May 2017.

The first known description of an emergence of Brood X appeared a May 9, 1715, entry in the journal of Rev. Andreas Sandel, the pastor of Philadelphia's "Gloria Dei" Swedish Lutheran Church. In 1737, botanist John Bartram wrote a letter that described the periodicity of the brood's emergences and his 1732 observations of the insect's insertion of their eggs into the small branches of trees northwest of Philadelphia. Bartram later recorded in greater detail within two manuscripts the brood's May 1749 emergence.

Pehr Kalm, a Swedish naturalist visiting Pennsylvania and New Jersey in 1749 on behalf of his nation's government, observed in late May an emergence of Brood X. When reporting the event in a paper that a Swedish academic journal published in 1756, Kalm wrote:

Kalm then described documents (including that of Rev. Sandel and one that he had obtained from Benjamin Franklin) that had recorded in Pennsylvania the emergence from the ground of large numbers of cicadas during May 1715 and May 1732. He noted that the people who had prepared these documents had made no such reports in other years.

Kalm further noted that others had informed him that they had seen cicadas only occasionally before the insects appeared in large swarms during 1749. He additionally stated that he had not heard any cicadas in Pennsylvania and New Jersey in 1750 in the same months and areas in which he had heard many in 1749. The 1715 and 1732 reports, when coupled with his own 1749 and 1750 observations, supported the previous "general opinion" that he had cited.

Kalm summarized his findings in a book translated into English and published in London in 1771, stating:

There are a kind of Locusts which about every seventeen years come hither in incredible numbers .... In the interval between the years when they are so numerous, they are only seen or heard single in the woods.

Moses Bartram, a son of John Bartram, described the 1766 emergence of Brood X in his Observations on the cicada, or locust of America, which appears periodically once in 16 or 17 years. Bartram noted that upon hatching from eggs deposited in the twigs of trees, the young insects ran down to the earth and "entered the first opening that they could find". He reported that he had been able to discover them 10 feet (3 m) below the surface, but that others had reportedly found them 30 feet (9 m) deep.

In April 1800, Benjamin Banneker, who lived near Ellicott's Mills, Maryland, wrote in his record book that he recalled a "great locust year" in 1749, a second in 1766 during which the insects appeared to be "full as numerous as the first", and a third in 1783. He predicted that the insects "may be expected again in they year 1800 which is Seventeen Since their third appearance to me".

All content from Kiddle encyclopedia articles (including the article images and facts) can be freely used under Attribution-ShareAlike license, unless stated otherwise. Cite this article:
Brood X Facts for Kids. Kiddle Encyclopedia.