Brookville is a borough in Jefferson County in the U.S. state of Pennsylvania, 80 miles (130 km) northeast of Pittsburgh. As of the 2010 census the population was 3,933. Founded in 1830, it is the county seat of Jefferson County

The area was initially settled in the late 1790s upon the arrival of brothers Joseph and Andrew Barnett, as well as their brother-in-law Samuel Scott, who together established the first settlement at the confluence of the Sandy Lick and Mill Creeks in the area now known as Port Barnett. The first non-Native American settler of the land within the eventual town limits was Moses Knapp, who built a log house at the confluence of North Fork Creek and Sandy Lick Creek (which form Redbank Creek) in 1801.

Brookville's main source of economic development throughout the 19th century was the lumber industry. Brookville's many creeks and its connection to larger rivers (the Clarion to the north, which, like the Redbank, flows to the Allegheny) allowed for extensive construction of lumber mills along the watersheds and the floating of timber to markets in Pittsburgh. The town enjoyed great economic success during the late 19th and early 20th centuries, serving as home to several factories, breweries, an important railroad stop for local coal and timber, and briefly the Twyford Motor Car Company, which operated from 1905 to 1907 and produced the world's first 4-wheel drive automobile. 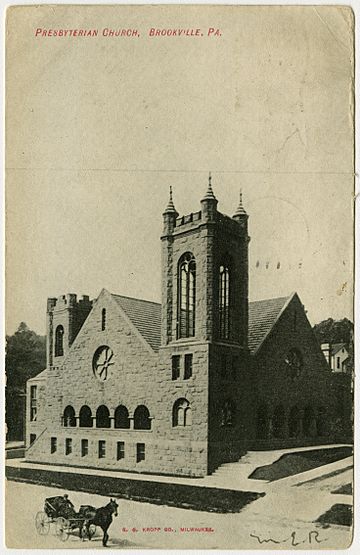 It is in the Eastern Standard time zone.

According to the United States Census Bureau, the borough has a total area of 3.2 square miles (8.3 km2), all of it land.

The town still supports the lumber industry, but coal extraction has given way to natural gas. It now also features several small and medium-sized businesses and some significant manufacturing operations. Interstate 80, which traverses the United States, was constructed just north of the Brookville borough and continues to stimulate the local economy.

Previous businesses include the Pittsburg and Shawmut Railroad.

Tourism is also an important business. The Brookville Historic District is an attraction, and the borough bills itself as the "Gateway to Cook Forest", a state park 16 miles (26 km) to the north. The community's historic preservation efforts have earned Brookville many accolades. Among these are the town's Main Street Project being recognized as having had the longest sustained impact of a Main Street Project in Pennsylvania and in 2012 its selection as a national finalist in the "America's Prettiest Painted Places" competition.

There is a small farming community called Hazen 8 miles (13 km) northeast of Brookville that houses a large flea market during the warmer months.

All content from Kiddle encyclopedia articles (including the article images and facts) can be freely used under Attribution-ShareAlike license, unless stated otherwise. Cite this article:
Brookville, Pennsylvania Facts for Kids. Kiddle Encyclopedia.