Brown Memorial Park Avenue Presbyterian Church of Baltimore, Maryland, U.S., is a large, Gothic Revival-style church built in 1870 and located at Park Avenue and Lafayette Avenue in the city's Bolton Hill neighborhood. Named in memory of a 19th-century Baltimore financier, the ornate church is noted for its exquisite stained glass windows by renowned artist Louis Comfort Tiffany, soaring vaulted ceiling, and the prominent persons associated with its history. Maltbie Babcock, who was the church's pastor 1887–1900, wrote the familiar hymn, This is My Father's World. Storied virtuoso concert performer Virgil Fox was organist at Brown Memorial early in his career (1936–1946).

Called "one of the most significant buildings in this city, a treasure of art and architecture" by Baltimore Magazine, the church underwent a $1.8 million restoration between 2001 and 2003. It is part of the Presbyterian Church (U.S.A.) denomination.

The Brown Memorial Presbyterian Church building was dedicated on December 4, 1870, in memory of George Brown, chairman of the Baltimore-based investment firm, Alex. Brown & Sons, and one of the founders of the pioneering Baltimore and Ohio Railroad in 1827.

Construction was funded by a gift of $150,000 from his widow, Isabella McLanahan Brown, an amount equivalent to more than $4 million in 2009. George Brown was described by a Baltimore historian as a successful businessman and civic leader who "regarded religion as preeminent above all other things and loved his church with all the ardor of his noble nature". John Sparhawk Jones was the church's first pastor, serving from 1870 to 1884. Several of his collected sermons were later published in such books as Seeing Darkly, The Invisible Things, and Saved by Hope.

The church's pastor between 1887 and 1900 was Maltbie Babcock, who was formally installed on September 28, 1887. His biography in a 1910 encyclopedia described him as "a fluent speaker, with a marvelous personal magnetism which appealed to all classes of people, and the influence of which became in a sense national. His theology was broad and deep ... he reached people in countless ways and exerted everywhere a remarkable personal magnetism ... [having] an unusually brilliant intellect and stirring oratorical powers that commanded admiration". While at Brown, he led fund-raising efforts to assist Jewish refugees from Russia who were victims of an anti-Jewish pogrom. He was also a popular speaker with students at Johns Hopkins University. Under Babcock, the church acquired additional property at North and Madison Avenues for a chapel and Sunday School complex. 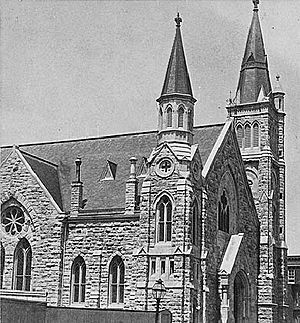 When Babcock was called to New York City's Brick Presbyterian Church in 1900, many prominent Baltimoreans, including the faculty of Johns Hopkins University, unsuccessfully implored Babcock to remain at Brown instead of accepting the call to Brick Church. Babcock resigned on January 17, 1900, to pastor the Manhattan church but died suddenly the following year at age 42. At his New York funeral, the presiding clergyman eulogized him, "We do not need a candle to show a sunbeam...The work our brother has done – the life he lived speaks for him." A memorial service for the esteemed former pastor was held at Brown Memorial on May 22, described as "impressive" by the New York Times. So inspired was former U.S. Postmaster General James Albert Gary, a member of Brown Memorial, that he chaired a committee to raise $50,000 (the equivalent of $1.4 million in 2009) for construction of a new church in memory of the beloved former pastor. More than half of that amount was raised the first day from the wealthy congregation, the New York Times reported, and the new Babcock Memorial Presbyterian Church was soon constructed on Brown Memorial Church's North Avenue property.

Babcock's successor as minister of Brown Memorial, John Timothy Stone, also presided over a large memorial gathering in Baltimore on June 2, 1901, choosing as the text for his address to the throng: "For where your treasure is, there will your heart be also" (Matthew 6:21). Babcock was eulogized at the Baltimore service by various prominent educators, including Daniel C. Gilman, the first president of Johns Hopkins University, John F. Goucher, the founder of Goucher College, and Francis L. Patton, president of Princeton University. A poem by Babcock was published posthumously the following year by his wife as the familiar hymn, This is My Father's World.

The sanctuary was enlarged in 1905 with the addition of a transept and several Tiffany windows while Stone was minister. Further significant development occurred in 1931 under T. Guthrie Speers, with the addition of the current chancel designed by notable architect Ralph Adams Cram and the installation of the present 4-manual pipe organ by Ernest M. Skinner. Speers had a popular ministry at Brown Memorial Presbyterian Church from 1928 to 1957. He began an outreach program to Baltimore's Jewish community, occasionally exchanging pulpits with local rabbis.

After Speers' retirement in 1957, John Middaugh was minister from 1958 to 1968. Middaugh was a regular panelist for ten years on the weekly television program To Promote Goodwill, an interfaith discussion of social and religious issues produced by WBAL-TV and broadcast worldwide on the Voice of America. He was also in the forefront of the civil rights movement in the early 1960s. Along with William Sloan Coffin and dozens of other clergymen and civil rights activists, Middaugh was arrested in a clash with police at Baltimore's Gwynn Oak Amusement Park in July 1963 over efforts to desegregate the popular attraction.

Membership peaked at 1,336 in 1952 but subsequently declined in the late 1950s as much of the city's population migrated to the suburbs. In response, a portion of the congregation decided in 1956 to build a church in the suburban Woodbrook area north of Baltimore. Other members wished to remain at the Bolton Hill location, prompting a decision to operate one church at two locations, with a shared ministerial staff. In the early 1970s, the church began a tutoring program for neighborhood children and a "Meals on Wheels" service under then-ministers Iain Wilson, pastor, and Clinton C. Glenn Jr., assistant minister. In 1980, the congregations of the two churches voted for separation. The original Bolton Hill church was subsequently constituted as "Brown Memorial Park Avenue", to distinguish it from "Brown Memorial Woodbrook", when the separation was completed in October, 1980. The Woodbrook church had more than 500 members at the time, but eventually dwindled to an average of only 45 persons attending Sunday services by 2017, when the Woodbrook church property was closed and put up for sale.

The immediate past minister of the Park Avenue church is Roger J. Gench, pastor from 1990 to 2002, who is now pastor of historic New York Avenue Presbyterian Church in Washington, D.C.

The full list of senior ministers from 1870 to present is: 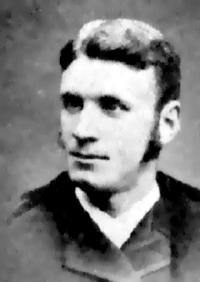 Maltbie D. Babcock, minister of Brown Memorial Presbyterian Church (1887–1900) and author of the hymn, This is My Father's World

The current pastor of Brown Memorial Park Avenue Church since 2004 is Andrew Foster Connors. A native of Raleigh, North Carolina, he earned a Bachelor of Arts from Duke University and a Master of Divinity degree from Columbia Theological Seminary in 2001. He is a recipient of the prestigious David H. C. Read Preaching Award, named for Presbyterian clergyman and author David H. C. Read of New York City's Madison Avenue Presbyterian Church.

His wife, Kate Foster Connors, whom he met while both were student interns for U.S. Representative David Price, is also an ordained minister and serves as youth director at Brown Memorial. The Connors have two children.

Under the pastorate of Andrew Foster Connors, the church's historic leadership continues in social justice issues including national peace efforts, a statewide campaign for marriage equality, local efforts to rebuild blighted neighborhoods, and advocacy of after-school programs to invest in the youth of Baltimore. His views on current affairs are frequently reported in the Baltimore Sun daily newspaper. Connors has also taken an active role in dialogues between the Jewish and Christian faith communities. 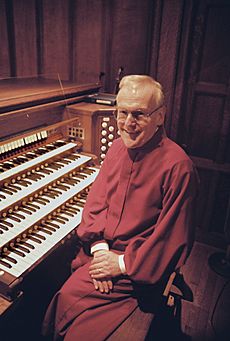 The current minister of music and organist at Brown Memorial Presbyterian Church since June, 2012, is Michael Britt, who studied music at the Peabody Conservatory and the Conservatoire de Paris. He succeeded Dr. John Walker, an internationally renowned concert organist and CD recording artist, who was minister of music between 2004 and December, 2011. Formerly director of music and organist at Riverside Church in New York City (1983–1992) and Shadyside Presbyterian Church in Pittsburgh, Pennsylvania (1992–2005), Walker has a Doctor of Musical Arts degree from Stanford University and is a past President of the American Guild of Organists. He was named Minister of Music Emeritus by Brown Memorial in 2012 and continues to perform there occasionally.

Other previous organists include the celebrated virtuoso Virgil Fox, who gained considerable fame as a concert performer and recording artist while at Brown Memorial early in his career, from 1936 to 1946. Later, Richard Ross was also a significant music figure in the life of the congregation, succeeding Fox as choirmaster and organist, while also composing music. Francis Eugene Belt then served as organist for more than 50 years, spanning the 1950s to the late 1990s.

The 4-manual Ernest M. Skinner pipe organ has 2,939 pipes and remains essentially the same today as when it was installed in 1931 and tonally finished by G. Donald Harrison, as Skinner's opus 839. The organ underwent a complete restoration between 2002 and 2005, with all original 45 ranks of the instrument fully preserved. A 99-memory level Capture System was added to the organ in 2005.

The choir sings a wide range of choral music at Sunday services, from works of classical composers, such as Mozart's Ave verum corpus and choruses by Handel and Johannes Brahms, to spirituals and anthems by 20th-century composers, such as Jane Marshall's My Eternal King. Major choral works are also performed during the year, such as the oratorio Elijah by Felix Mendelssohn, conducted by Walker and accompanied by guest organist Frederick Swann, and Johann Sebastian Bach's cantata, God's time is always the very best time ("Actus Tragicus", BWV106), in the 2008–2009 season. The choir's May, 2009, performance of Elijah has since been released on CD.

Along with regular worship services on Sundays and holy days, Brown Memorial Park Avenue Church offers various programs of enrichment and outreach, such as concerts, lectures, and study forums. The "Tiffany Series" presents high quality classical concerts as well as distinguished speakers at the church. Speakers have included Harry Belafonte and Marian Wright Edelman, founder of the Children's Defense Fund, who spoke on Children in Peril: What Does Our Faith Require of Us? on March 16, 2008. The series "Wednesday Nights at Brown" offers dinner speakers for adults, such as John Walker's "Christian Hymnody and the Theology Behind It," and arts or music activities for children.

The church is active in numerous missions, both locally and on the national and world scenes. Its Urban Mission committee sponsors the Tutoring Program, the oldest volunteer school tutoring program in the nation, and partners with a local elementary school in a story-reading program and yearly donation of books to all pupils. High school and college age youth participate in "Share," an annual summer missions trip to El Salvador. The church also has a longstanding outreach program with the Pine Ridge Indian Reservation in South Dakota, where Brown Memorial youth and adults conduct summer learning camps for Lakota children. 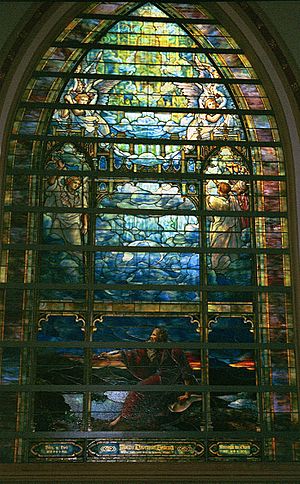 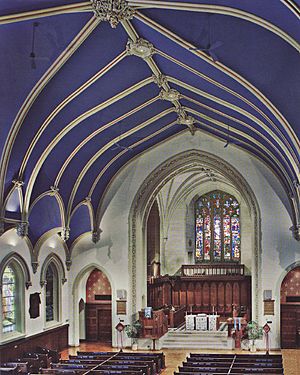 Among the considerable number of stained glass windows, those crafted by Louis Comfort Tiffany in 1905 are especially prized for their vibrancy and exceptional depth. Baltimore City Paper called the church and its collection of eleven Tiffany windows, "the most magnificent interior space in Baltimore City". During the restoration survey in 2000, various stained glass experts praised the extent and craftsmanship of the windows. As part of the church's $1.8 million restoration project between 2001 and 2003, all of the stained glass windows were releaded and restored to their original lustre. The Tiffany windows are:

Some of the non-Tiffany windows in the church:

All content from Kiddle encyclopedia articles (including the article images and facts) can be freely used under Attribution-ShareAlike license, unless stated otherwise. Cite this article:
Brown Memorial Presbyterian Church Facts for Kids. Kiddle Encyclopedia.