Bolton Hill is a neighborhood in Baltimore, Maryland, with 20 blocks of mostly preserved buildings from the late 19th century. It is listed on the National Register of Historic Places, preserved as a Baltimore City Historic District, and included within the boundaries of Baltimore National Heritage Area. The neighborhood is bounded by North Avenue, Mount Royal Avenue, Cathedral Street, Dolphin Street, and Eutaw Place. Bolton Hill is a largely residential neighborhood with three-story row houses with red brick, white marble steps, and high ceilings. There are also larger more ornate originally single-family houses, many houses of worship, parks, monuments, and a few large apartment buildings. Many significant residents have lived in the neighborhood, including F. Scott Fitzgerald, Woodrow Wilson, the Cone sisters, and Florence Rena Sabin. 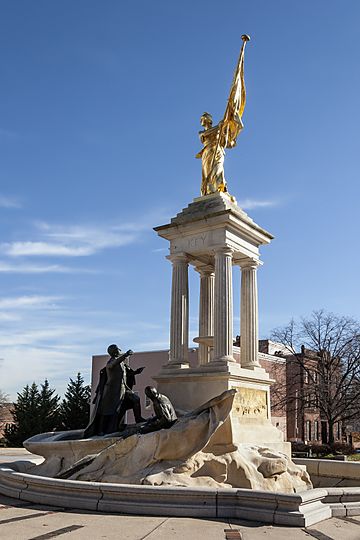 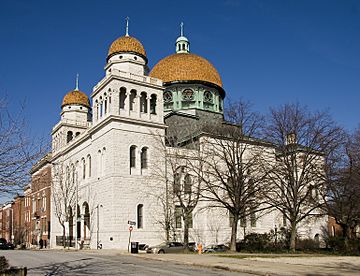 Bolton Hill is named after the estate of George Grundy, who named his estate house after Bolton le Moors, which was located at the site of the current Fifth Regiment Armory. Around 1850, the area began to transition from large estate to traditional baltimore row houses, which were built along a diagonal street grid, unlike the traditional north-south grid of most Baltimore neighborhoods. This grid was constructed by Thomas Poppleton to follow now Pennsylvania Avenue and the Jones Falls. Early row houses featured plain brick facades with decorative cornices, door surrounds, and window lintels. Later row houses features more ornate designs. Construction of row houses continued until the end of the 19th century, but a few large apartments were constructed at the beginning of the 20th century.

Unlike other prominent neighborhoods in Baltimore at the end of the 19th century, which had restrictive covenants against African-Americans, Jews, and Asians, Bolton Hill was a relatively diverse neighborhood. Although socially segregated, many African-American servants for the mansions of wealthy Bolton Hill residents lived in the alley houses of Bolton Hill. At the end of the 19th century, Baltimore's German Jewish community moved to Bolton Hill. Jews had moved to the western edge of Bolton Hill, and many synagogues, such as Baltimore Hebrew, Chizuk Amuno, and Shearith Israel, moved to McCullough Street and Madison Avenue just west of Bolton Hill. Furthermore, two large temples were built within Bolton hill. Eutaw Place Temple was built by Temple Oheb Shalom on Eutaw Place in 1892, and the Har Sinai Congregation built a large temple on Bolton Street in 1894.

At the beginning of the 20th century, white residents of Bolton Hill began to fear the expanding African-American community to the west of the neighborhood, eventually leading to white flight. The Mount Royal Improvement Association in 1928 and pushed for covenants against African-American residency in the neighborhood. The associated boasted that Bolton hill was a "protected area" and claimed that "the greatest achievement of the Mount Royal Improvement Association has been the subjecting of the property in its area to a restriction for white occupancy only." By the mid-20th century, however, many Bolton Hill residents moved to the suburbs for modern homes with yards, and in the early 1960s most of the Jewish institutions had moved to the northwest suburbs.

In the early 1960s, federal urban renewal funds were used to demolish houses on the western edge of the neighborhood, which were considered "slums" and targeted for "stabilization." Several large new developments were built in their place. In 1967, Bolton Hill became a Baltimore City historic district, and in 1971 it was placed on the National Register of Historic Places. As a result, the majority of the neighborhood was largely preserved.

All content from Kiddle encyclopedia articles (including the article images and facts) can be freely used under Attribution-ShareAlike license, unless stated otherwise. Cite this article:
Bolton Hill, Baltimore Facts for Kids. Kiddle Encyclopedia.