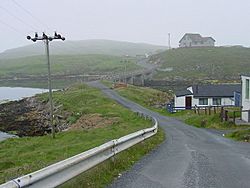 Bruray (Scots: Bruray) is one of the three Out Skerries islands of Shetland, and contains Scotland's most easterly settlement.

It is separated from Housay by North Mouth and South Mouth.

The island occasionally suffers from water shortages. There is little peat on the Out Skerries, so the residents have been granted rights to cut in on Whalsay.

A ferry connects the Out Skerries with Vidlin and Lerwick on the Shetland Mainland, as well as flights from Tingwall by Loganair.

At the autumn 2010, the islands of Housay and Bruray were on sale for £250,000. "The main islands are held under crofting tenure. The crofting community have been offered the opportunity to register their interest in acquiring the property but have formally declined from doing so."

All content from Kiddle encyclopedia articles (including the article images and facts) can be freely used under Attribution-ShareAlike license, unless stated otherwise. Cite this article:
Bruray Facts for Kids. Kiddle Encyclopedia.