Bryson is a city in Jack County, Texas, in the United States. As of the 2000 census, the city population was 528. 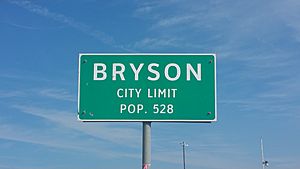 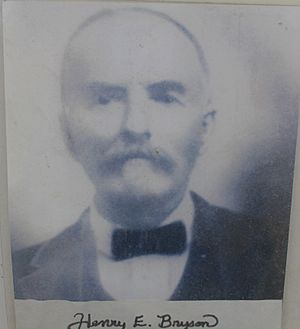 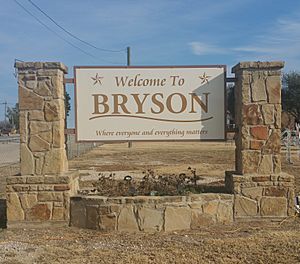 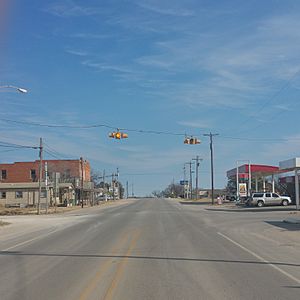 The only light in Bryson

The community was first settled in the late 19th century. Originally known as Mount Hecla, a post office opened under that name in 1878. Henry Bryson built the area's first residence, a log cabin, that same year. The community was later renamed after him. This change was officially recognized in 1884, when the local post office took the name Bryson. Mr. Bryson went on the serve as County Commissioner. Early pioneer family names of Bryson were Blount, Chambers, Clayton, Cook, Crumpton, Cullers, Enlow, Epperson, Henderson, Keyser, Kuykendall, McCloud, Moore, Raley, Shanafelt and Vanhooser. 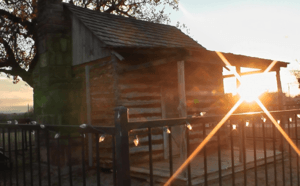 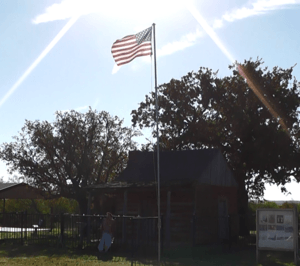 The Chicago, Rock Island and Texas Railway, a subsidiary of the Chicago, Rock Island and Pacific Railroad, reached Bryson in the fall of 1902. Although oil had been discovered in Jack County as early as 1898, it wasn't until the mid-1920s that Bryson became an oil processing center for local producers. The resulting population boom led to the community being known as Jack County's "second city" (after Jacksboro).

In, June 6, 1929 the town incorporated a mayor-council form of government, men that served were: B.B. Bryson, Sam Cullers, L.O. Moore, J.R. Clayton, Willis Williams, and Williard Schlitter. In 1929 and had a population of 641 in the 1930 census. A 1938 oil boom in Bryson saw the population explode with many people forced to live in tents. In 1940, the census dropped back to 806. As oil production declined, so did the population. The low point occurred in 1970, when only 455 people lived within the city limits. During the latter half of the 20th century, Bryson slowly grew to over 500 residents. In 1988, there were seven businesses serving the community. There were reportedly twenty-two businesses in Bryson as of 2004. 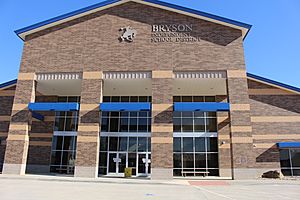 There were 222 households out of which 31.1% had children under the age of 18 living with them, 53.2% were married couples living together, 9.5% had a female householder with no husband present, and 33.8% were non-families. 30.6% of all households were made up of individuals and 14.9% had someone living alone who was 65 years of age or older. The average household size was 2.38 and the average family size was 2.98.

In 1875, the first school was started at a log cabin and was named "Cottonwood." As the town grew, and population with its the log cabin school was replaced with a frame building, which was also replaced by a two story building. In 1885, the school was renamed "Bryson Academy" with two new instructors named J.T. Lippard, and C.B Hickman. in 1905, the two story frame was turned into a brick structure for elementary and High school. In 1938, the school built a gym, and a new high school was built and the old brick building was turned into an AG shop. In 1957 a new elementary school building was built. In 2012, the old school was torn down and a new school was raised.

All content from Kiddle encyclopedia articles (including the article images and facts) can be freely used under Attribution-ShareAlike license, unless stated otherwise. Cite this article:
Bryson, Texas Facts for Kids. Kiddle Encyclopedia.