The Buckner Homestead Historic District, near Stehekin, Washington in Lake Chelan National Recreation Area incorporates a group of structures relating to the theme of early settlement in the Lake Chelan area. Representing a time period of over six decades, from 1889 to the 1950s, the district comprises 15 buildings, landscape structures and ruins, and over 50 acres (200,000 m2) of land planted in orchard and criss-crossed by hand-dug irrigation ditches. The oldest building on the farm is a cabin built in 1889. The Buckner family bought the farm in 1910 and remained there until 1970, when the property was sold to the National Park Service. The Buckner Cabin was listed on the National Register of Historic Places in 1974. The rest of the Buckner farm became a historic district in 1989. Today, the National Park Service maintains the Buckner homestead and farm as an interpretive center to give visitors a glimpse at pioneer farm life in the Stehekin Valley.

The property that became the Buckner farm was originally settled by William (Bill) Buzzard. It is located several miles north of Lake Chelan along the Stehekin River. When Buzzard arrived in 1889, his 160-acre (0.65 km2) parcel was the farthest homestead from the Stehekin settlement at the head of the lake. Buzzard built a one-story log cabin on the site, and cleared some land for pasture and cultivation. In 1892, Buzzard shipped 1,000 pounds of potatoes 50 miles (80 km) down Lake Chelan to the town of Chelan, Washington and sold the rest of his crop to local miners. By 1895, Buzzard had planted a small apple orchard and was growing cabbages as well as potatoes. Buzzard also cut cordwood on his property and sold it to the steamboat company that operated on Lake Chelan. According to a 1902 United States Forest Service report on "agricultural settlement" in the Stehekin area, William Buzzard had a three-room house, log barn, and 25 acres (100,000 m2) of cultivated land. On 9 November 1903, Buzzard officially purchased his homestead from the United States Government. He later sold 11 acres (45,000 m2) to a neighbor.

In 1910, Buzzard sold his remaining property to a Californian named William Buckner for $5,000. Instead of a lump-sum payment, Buzzard wanted $50 per month until the total amount was paid. After selling the property, Buzzard moved to Chelan where he lived until his death in 1919. When Buzzard died, Buckner was only one payment short of completing the agreement so he used the final $50 payment to purchase a headstone for Buzzard, who was buried in the Old Fraternal Cemetery in Chelan. 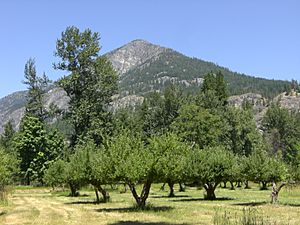 In 1911, Buckner brought his wife and three sons to the farm (also call the "Buckner ranch"). Upon arrival, the family found most of the land covered with stumps because the timber had been cut and sold by the previous owner. Over the next several years, the family cleared enough stumps to plant a 50-acre (200,000 m2) apple orchard. The Buckners also designed an irrigation system that diverted water from Rainbow Creek to their orchard. The main irrigation canal and watering ditches, totaling over four miles (6 km), were all dug by hand during the summer of 1911.

Initially, the Buckner family only lived on the ranch during the summer, moving back to California in the fall to avoid Stehekin's harsh winters. However the family returned each spring to work their farm. Over the next few years, they constructed a variety of buildings for protecting animals, sheltering farm equipment, and preserving food. Eventually, the Buckner ranch had more than a dozen structures including a barn, workshop, milk house, smokehouse, root cellar, chicken coop, outhouse, sleeping cabins for guests or hired hands, and several general-purpose sheds. They also built a mile of wooden fence to enclose their entire property. 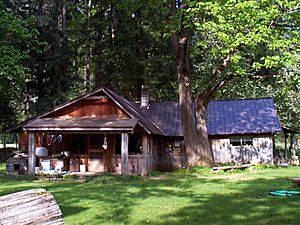 In 1915, Harry Buckner, one of William's sons, took up permanent residence at the ranch. In 1919, Harry married a young lady from Stehekin and she joined him at the ranch. Since William Buckner and his wife continued to live in Bill Buzzard's log cabin during the summer months until 1924, Harry expanded one of sleeping cabins into a home for himself and his new wife, Olive. Harry and Olive worked hard to make the farm a comfortable place to live. They raised pigs, cows and chickens. The family grew vegetables in their garden, and planted large flower beds. When the family decided they wanted electric lights, Harry converted a smokehouse into a power generator house. Harry also built a play house for his three young daughters; and when the girls were older, he constructed a concrete swimming pool, fed by farm's irrigation system.

Olive Buckner died in 1948. Harry continued to live on the ranch and eventually remarried. In 1953, the packing shed roof collapsed under a heavy winter snow load. In 1956, Buckner retired from farming and became Stehekin's postmaster. In 1970, Buckner sold the homestead and most of his property to the National Park Service, retaining a parcel of land for his retirement home. He lived there until his death in 1976.

After purchasing the Buckner property, the National Park Service incorporated it into the Lake Chelan National Recreation Area. The Buckner homestead and farm has been preserved, and is used by the National Park Service as an interpretive center to show visitors what pioneer life was like in the Stehekin Valley. Although it is no longer a commercial farm, horses still graze in the Buckner's pasture, water still flows through the irrigation ditches, and apples are still harvested from the orchard in the fall. While some changes have been made to the building in order to preserve them, many of the structures are still in use for their intended purpose, including the main house which is now home for a National Park Service employee.

Because of its unique historic value as an original settler's homestead, the Buckner Cabin (originally built by William Buzzard) was listed on the National Register of Historic Places in 1974 (NRHP #74000912). In 1989, the remaining elements of the Buckner farm were joined with the cabin to create the Buckner Homestead Historic District. 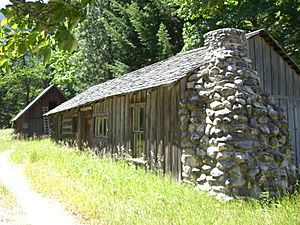 Buzzard-Buckner cabin built in 1889 near Stehekin

Other buildings on the Buckner farm include a sleeping house, tool and equipment sheds, root cellar, chicken coops, outhouse, and a children's play house. The Buckner's swimming pool is included on the National Park Services inventory of structures, however, it is kept empty for safety reasons. Old farm equipment, like the Buckner's 1911 Hercules Stump Puller and several farm trucks, are also on display. The National Park Service maintains the Buckner's orchard, harvesting its apples every fall.

All content from Kiddle encyclopedia articles (including the article images and facts) can be freely used under Attribution-ShareAlike license, unless stated otherwise. Cite this article:
Buckner Homestead Historic District Facts for Kids. Kiddle Encyclopedia.