Chelan ( shə-LAN) is a city in Chelan County, Washington, United States. The population was 3,890 at the 2010 census. The population was 4,060 at 2015 Estimate from Office of Financial Management. It lies on the southeast tip of Lake Chelan, where the lake flows into the Chelan River.

Chelan is part of the Wenatchee−East Wenatchee Metropolitan Statistical Area.

The Chelan area was home to Salish speaking Native Americans known as the Chelan tribe prior to white settlement in the late 1800s. But before the settlers arrived, a new beast, the horse, came and with it just as quickly were smallpox, measles and other deadly infectious diseases. These diseases wiped out an estimated 90% of the Indians before David Thompson, the very first explorer in the area, arrived on the Columbia in 1811. The horse and the culture of the horse so prevalent with Indians of the Plains also took over by the time explorers and settlers arrived, so it is difficult to know what the original inhabitants' lives were truly like and who the Indians were before these monumental changes to their way of life. A people of the horse, though, they quickly became, adopting Plains Indian dress, beadwork, and more, and with white settlers came far more changes.

The Indians in the area were organized as small family groups who made decisions, not having a single chief who decided everything. But after white people came there was also a struggle for power: to maintain control of the lands that once were theirs, they needed one person to be able to speak for them. Though not a Chelan Indian himself, Chief Moses (a Shahaptin, not Salish speaker from the Columbia Basin and Okanagan) almost had a large section of land set aside for a reservation. However, with the low number of Indians and the ever-increasing number of miners looking for riches in the mountains, he found that defending his newly acquired territory was impossible and lost it all.

During a period of unrest between settlers and Native Americans in the 1870s, Lt. Colonel Henry Clay Merriam of the United States Army established Camp Chelan at the foot of Lake Chelan to control and safeguard the Indian population on the Moses Columbia Reservation. His family was with him for the 1880 Federal Census. The lake was largely inaccessible because of its sheer cliffs on most sides, so a makeshift road was built from the fort to the Columbia River where a courier and mail service from Walla Walla were established. The fort operated for about a year and was abandoned in October 1880 when the troops relocated to Fort Spokane.

The first European settlers in the area were William Sanders (one of main streets in Chelan is named after him) and Henry Dumpke, who arrived in 1886. After traversing several cliffs and streams and losing their horse, they safely arrived at the foot of the lake and were welcomed by the natives who encouraged them to stake claims. The presence of these settlers paved the way for more settlers to move to the valley. In 1888, L.H. Woodin of Minneapolis arrived in the valley and paddled up the lake in a skiff. Impressed by the area, Woodin constructed a sawmill at the foot of the lake. Chelan's main street is named for Woodin. At the same time, local ranchers were beginning to discover that orchards could be planted without the need of irrigation.

The town was platted and lots sold quickly. A post office was established in 1890. A school was built in 1892 followed by the first resort hotel, taking advantage of the area's natural beauty. Following the Panic of 1893, hard times began in earnest but never affected Chelan completely. The first bank was established in 1893. Chelan was officially incorporated on May 7, 1902. In 1903, the city gained electric lights and water service via nearby Donaldson Springs. A permanent town hall was constructed in 1904 (but was destroyed by fire in 1927). The town continues to grow as an agricultural center and resort community which helps it thrive to this day.

Chelan's climate is typical for Eastern Washington. Located behind the rainshadow of the Cascade Mountains, it receives a near-desert amount of precipitation each year. 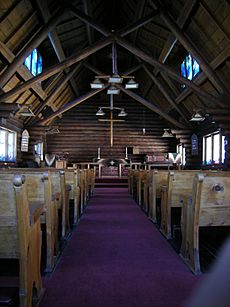 There were 1,602 households of which 29.2% had children under the age of 18 living with them, 49.1% were married couples living together, 10.6% had a female householder with no husband present, 4.7% had a male householder with no wife present, and 35.6% were non-families. 28.8% of all households were made up of individuals and 13.1% had someone living alone who was 65 years of age or older. The average household size was 2.39 and the average family size was 2.91.

There were 1,471 households out of which 29.6% had children under the age of 18 living with them, 49.8% were married couples living together, 10.1% had a female householder with no husband present, and 36.1% were non-families. 30.5% of all households were made up of individuals and 14.8% had someone living alone who was 65 years of age or older. The average household size was 2.35 and the average family size was 2.93.

All content from Kiddle encyclopedia articles (including the article images and facts) can be freely used under Attribution-ShareAlike license, unless stated otherwise. Cite this article:
Chelan, Washington Facts for Kids. Kiddle Encyclopedia.