Coordinates: 48°18′34″N 120°39′19″W﻿ / ﻿48.30944°N 120.65528°W﻿ / 48.30944; -120.65528 Stehekin is a small unincorporated community in Chelan County, Washington. It is part of Wenatchee–East Wenatchee Metropolitan Statistical Area. Located at the northwest end of Lake Chelan, it lies just south of the North Cascades National Park. It is within Lake Chelan National Recreation Area, a unit administered by the National Park Service. Stehekin has about 75 permanent residents, though its population swells during the summer with vacationers and seasonal workers. The name "Stehekin" comes from a Native American word meaning "the way through." 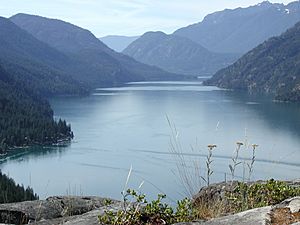 View of Stehekin and the north end of Lake Chelan.

Sights in Stehekin include the Buckner Homestead Historic District, The Golden West Visitor Center, Stehekin Pastry Company, the one-room Stehekin School, the 312' Rainbow Falls, and Harlequin Bridge. Stehekin is visited by hikers and bikers in the summer, and snowshoers and skiers in the winter, as well as photographers year-round.

There is no road access to Stehekin, though roughly 22 miles of road exist there. It is reachable by passenger ferry (the Lady of the Lake), by foot over the Cascade Pass, by private boat from Chelan, or by floatplane. The vehicles in Stehekin have been barged there on Lake Chelan.

In addition to access by Lake Chelan, visitors come to Stehekin by horseback, hiking, and flying into Stehekin State Airport (Identifier 6S9). The airport is only open July, August, and September, and is noted by Washington State as being one of the state's most challenging airports. While only 1,230 ft (370 m) msl, there are mountains on the sides and trees at each end of the 2,630 ft (800 m) runway. The airport is often a base for firefighting, at which times it is closed to public use. The Harlequin campground is located next to the airport. Trout and sockeye salmon are popular targets for fishing in Stehekin.

In 2003, much of the upper (northern) half of the Stehekin Valley Road was washed out by the nearby Stehekin River. Thus, access via Cascade Pass has become more difficult, adding as much as 10 miles (16 km) to the already strenuous trek.

Another town with a similarly small population and similar access is Holden Village, surrounded by the Glacier Peak Wilderness and located 12 miles (19 km) up the Railroad Creek Valley from Lucerne, a boat landing on Lake Chelan.

Stehekin is accessible from Washington Pass via the Pacific Crest trail. The PCT could also be used to access Stehekin from the Suiattle River Valley. Additionally, a network of trails through the mountains east of Stehekin provide access by foot and motorcycle to the Methow Valley area. The Chelan Summit trail starts near the nexus of Grade Creek Road in Chelan and provides a continuous trail all the way into Stehekin. 7,000 feet below on the lake shore runs the Lake Shore Trail, which leads into Stehekin from Prince Creek. The lady of the lake ferry services this trail head.

Stehekin has a highly unusual type of a continental climate that follows a hot-summer mediterranean (csa) precipitation pattern with the heavy winter snowfall being a major exception to a typical mediterranean climate. Summers are warmed by its inland location and the seasonal aridity rendering in frequent hot days. By contrast winter falls to temperatures far cooler than those encountered at the coast, but are still moderate compared to areas further east in North America's interior.

All content from Kiddle encyclopedia articles (including the article images and facts) can be freely used under Attribution-ShareAlike license, unless stated otherwise. Cite this article:
Stehekin, Washington Facts for Kids. Kiddle Encyclopedia.