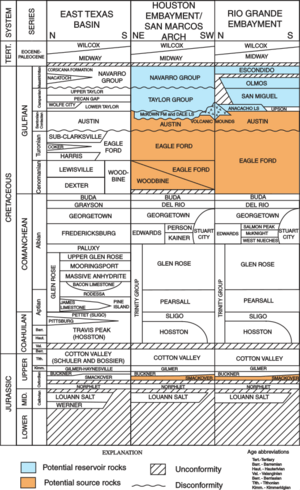 The Buda Limestone is a geological formation in the High Plains and Trans-Pecos regions of West Texas and in southern New Mexico, whose strata date back to the Late Cretaceous. Pterosaur remains are among the fossils that have been recovered from the formation. 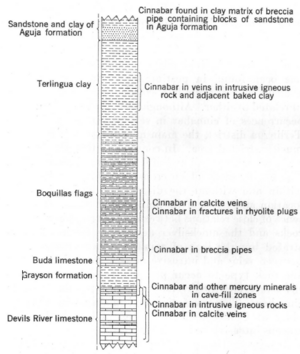 The Buda Limestone is a dense white to yellow sparry limestone with numerous calcite veins that weathers to yellowish or pinkish due to its iron content. In far western Texas, the formation overlies the Del Rio Formation and is in turn overlain by the Eagle Ford Group. The total thickness is about 100 feet (30 m). In trans-Pecos Texas, the formation rests on the Grayson Formation and is overlain by the Boquillas Formation.

In the Big Bend National Park area, the formation is divided into three informal members. The lowest is 25 feet (7.6 m) of hard microgranular grayish-white limestone that breaks with a conchoidal fracture. The middle member is about 30 feet (9.1 m) of an argillaceous or marly nodular grayish-white limestone. The upper member is up to 60 feet (18 m) of limestone similar to the lower member.

All content from Kiddle encyclopedia articles (including the article images and facts) can be freely used under Attribution-ShareAlike license, unless stated otherwise. Cite this article:
Buda Limestone Facts for Kids. Kiddle Encyclopedia.