Bures is a village in eastern England. Because of its location straddling the Essex/Suffolk border, it is divided into two civil parishes: Bures Hamlet in Essex and Bures St. Mary in Suffolk. The village is thus served by two county councils, three district councils (Colchester, Braintree, and Babergh), two Members of Parliament and two Education Authorities (Essex and Suffolk).

The parishes lie on opposite sides of the River Stour, which is the county boundary between Essex and Suffolk. The entire village, however, is generally called Bures.

There are eight bells that hang the church of St Mary the Virgin, with the largest weighing 21 cwt. They were augmented from six to eight bells in 1951 by Gillett and Johnston of Croydon. 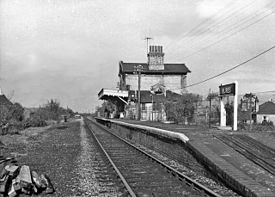 Bures is served by a railway station on the Gainsborough Line, seen here in 1966.

All content from Kiddle encyclopedia articles (including the article images and facts) can be freely used under Attribution-ShareAlike license, unless stated otherwise. Cite this article:
Bures, England Facts for Kids. Kiddle Encyclopedia.