Burke Brook is a small stream in Toronto, Ontario. It is part of the Don River watershield, a major river that flows into Lake Ontario. The north end of the stream begins near Glenview Senior Public School.

Havergal Stream runs entirely through the property of Havergal College girls' school. The start of the stream is fed by local sewers and nearby springs. The Havergal Stream then proceeds to meet the North Toronto Storm Trunk Sewer at the edge of the school property. The water of the stream flows into the North Toronto Storm Trunk Sewer, where the sewer meets the Burke Brooke.

Havergal Stream used to start under the intersection of Old Orchard Grove and Barse Street by the Baycrest Hospital. The length of the river was 1.5 kilometres (0.93 mi). The river left its source and proceeded in a south-south-east direction to the current grounds of Havergal College, where nowadays it pops ups from the ground. The stream then went to where the current North Toronto Storm Trunk Sewer is and then met the Burke Brooke a little east of there.

The Burke Brooke use to have a total of 6 kilometres (3.7 mi) of tributary streams.

Blythwood Stream, which started by Glengowan Road and Strathgowan and also at Saint Leonards Avenue and Saint Ives Avenue. It is the closest tributary to the Don River. The two section merged at Strathgowan Road and Fidelia Avenue. The stream followed a course running just east of Blythdale Road almost parallel until it met Burke Brook. The length of the stream was around 1 kilometre (0.62 mi).

Parks are in order from east to west. 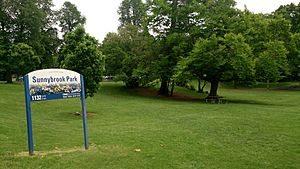 Sunnybrook Park is a major park in Toronto that connects to the Don Valley from the west. It is home to the Sunnybrook Stables, dog parks, and many sport fields. There are also many bike and walking paths, with a few car-accessible roads scattered throughout. The park is also known for its cricket. 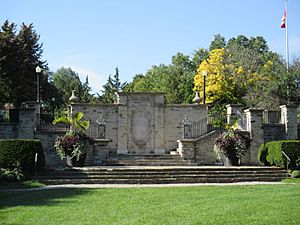 This park is between Blythwood Ravine Park and Yonge Street. It contains the tennis courts of the Lawrence Park Tennis Club and the fields of the Lawrence Park Lawn Bowling and Croquet Club. The main attraction of the park is the song The Maple Leaf Forever, a patriotic song about Canada, by Alexander Muir, printed on a stone wall with stairs connected to the fields and gardens of the park. The park was originally located on the west side of Yonge Street across from the Mount Pleasant Cemetery to celebrate the Toronto centennial celebrations. To build the Yonge Subway the TTC paid over $100,000 to move the park, including the stone wall, to its current location in Lawrence Park.

In Duplex Parkette, Burke Brook is underground in pipes. Glenview Parkette is two islands with pathways running through them.

Chatsworth is a ravine between Duplex Avenue and Glenview Senior Public School with a path running to Cheritan Avenue. It has a bridge in the middle moving the path from south of the river to north of the river.

In order from east to west:

All content from Kiddle encyclopedia articles (including the article images and facts) can be freely used under Attribution-ShareAlike license, unless stated otherwise. Cite this article:
Burke Brook Facts for Kids. Kiddle Encyclopedia.