Burnhope is a village and civil parish in County Durham, England. It is located in the Craghead valley on the opposite side to Stanley and has approximately 1200 inhabitants, measured at 1,564 in the 2011 census.

Burnhope is a village of contrasts, being home to many of the area's poorest and richest people (among them, children's author Terry Deary). In 2003 two wind turbines were erected in a field between the village and nearby Craghead, creating a new landmark to accompany the transmission mast. Burnhope is the only place that the Durham Miners' Gala has been held apart from Durham. This was in 1926 the year of the General Strike when it was banned at Durham so it was moved to Burnhope. In 1986 a 60th anniversary was held to mark this event. 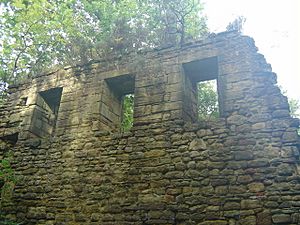 Burnhope has increased in size rapidly within the last few years with over 120 new homes being built by developer, Keepmoat Homes

Burnhope was also the name of a village in upper Weardale, which is further west in County Durham. The village was inundated in the 1930s by the filling of Burnhope Reservoir.

All content from Kiddle encyclopedia articles (including the article images and facts) can be freely used under Attribution-ShareAlike license, unless stated otherwise. Cite this article:
Burnhope Facts for Kids. Kiddle Encyclopedia.