Bushong is a city in Lyon County, Kansas, United States. As of the 2010 census, the city population was 34. 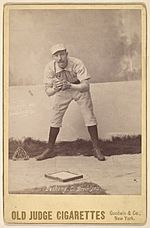 The city, originally a whistle-stop of the Missouri Pacific Railroad, was first named "Weeks". The city took its present name in 1886 in honor of St. Louis Browns catcher Albert J. "Doc" Bushong. Following the Browns' victory in the 1886 World Series over the Chicago White Stockings, the Missouri Pacific Railroad honored several of the St. Louis players by naming some of their towns after the players. Bushong had played every game in the series and was at bat in Game Six, when the winning run scored by stealing home. The city of Bushong is the only one still carrying its name from the 1886 World Series.

During the Cold War, Bushong was the location of one of the first generations of nuclear-tipped intercontinental ballistic missiles. The site, active from 1961–1965, was part of the 548th Strategic Missile Squadron.

Bushong is part of the Emporia Micropolitan Statistical Area.

There were 12 households, of which 41.7% had children under the age of 18 living with them, 66.7% were married couples living together, 8.3% had a female householder with no husband present, 8.3% had a male householder with no wife present, and 16.7% were non-families. 8.3% of all households were made up of individuals, and 8.3% had someone living alone who was 65 years of age or older. The average household size was 2.83 and the average family size was 3.10.

All content from Kiddle encyclopedia articles (including the article images and facts) can be freely used under Attribution-ShareAlike license, unless stated otherwise. Cite this article:
Bushong, Kansas Facts for Kids. Kiddle Encyclopedia.