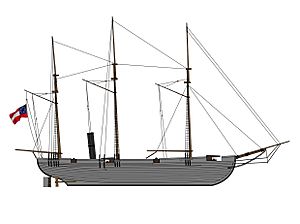 CSS Chattahoochee was a twin-screw steam powered gunboat built at Saffold, Georgia; she was christened for the river upon which she was built. The gunboat entered Confederate States Navy service in February 1863.

Early in the American Civil War the Confederate States Navy sought a way to break the blockade imposed by the United States Navy on Apalachicola Bay, which prevented most sea-borne commerce from reaching Apalachicola, Florida, Columbus, Georgia, and other points on the Apalachicola River and its tributary, the Chattahoochee River. The plan was to build seaworthy warships near the industrial center of Columbus, and sail them downriver to Apalachicola Bay to challenge the US Navy ships on blockade duty there. In October 1861 the CS Navy contracted with David S. Johnston of Saffold, Georgia to build a gunboat. Originally expected to be completed in four months, the gunboat was finally delivered 10 months late, on December 8, 1862, still needing work. She was commissioned on February 24, 1863 as the CSS Chattahoochee. The Chattahoochee was a three-masted schooner with two steam engines, 130 feet (40 m) long, with a beam of 30 feet (9.1 m) and drawing 8 feet (2.4 m) of water at the stern. Using both engines and sails, it was capable of making a maximum of 12 knots (22 km/h; 14 mph).

Lieutenant Catesby ap Roger Jones was assigned command of the Chattahoochee in July 1862. Jones had been in charge of the conversion of the captured USS Merrimack into the iron-clad CSS Virginia, and served as lieutenant on the Virginia in her first battle. When the Virginia's captain was injured in that battle, Jones succeeded to command of the ship for her battle the next day with the USS Monitor. After arrival in Saffold, Jones was involved in getting construction of the Chattahoochee completed. He complained about the difficulty of finding supplies for the ship. By September, he had his officers assembled, but had no crew.

While the Chattahoochee was under construction, the Confederate States Army abandoned the city of Apalachicola, exposing the valleys of the Apalachicola, Chattahoochee, Flint and Chipola rivers to raids and invasions by Union forces. The governors of Alabama, Florida and Georgia appealed to the Army to protect against such invasions by placing obstacles in the Apalachicola River and installing batteries along its banks. By the time the Chattahoochee was commissioned, obstacles in the river blocked its access to Apalachicola Bay and the Gulf of Mexico. In late 1862, a chain attached to sunken rafts had been stretched across the river at the "Narrows", a series of bends in the river 36 miles (58 km) above the city of Apalachicola. The chain caught logs, trees and other debris floating down the river. By March 1, 1863, captured debris was backed up 100 yards (91 m) from the chain, thick enough for a man to walk across. Gun batteries had already been placed at Ricco's Bluff and Alum Bluff, respectively 56 and 84 miles (90 and 135 km) upstream from Apalachicola. The "Narrows" was in the middle of a swamp, but artificial mounds were built on both sides of the river for gun batteries.

The Chattahoochee spent the first part of 1863 shaking down, undergoing repairs and training the crew. There were constant problems with the engines, and on January 30, she hit a rock, causing a significant leak. The ship could no longer fulfill its original purpose, to sail down to the Gulf and sink or drive away the blockading US Navy ships. The ship never even made it down to the obstacle at the Narrows, where it could at least have served as a floating battery to help protect the obstacle. Although far from combat, the ship lost crew to death and desertion. In late January 1863 Lt. Jones was transferred to Texas and replaced in late February by Lt. John Julius Guthrie.

The crew began stoking the boiler, but did not pump water into it for almost two hours, and the boiler exploded at about noon. Nineteen people aboard the Chattahoochee were killed or died later from their wounds, including two or three who drowned while trying to swim to shore. Word was sent upriver, and another ship reached the wreck in the middle of that night. The dead and wounded were moved to the river banks, where they were exposed to the weather. All day on May 27 a hurricane had been moving towards the valley of the Apalachicola River. The hurricane came ashore as a category 2 storm near the city of Apalachicola around sunrise on May 28. The wounded lay on the shore unprotected from the wind and rain for more than 24 hours as the hurricane passed over. The bodies and the wounded were then taken back to Chattahoochee. The wounded did not received competent medical care until five days after the explosion. A slow leak finally sank the Chattahoochee 40 hours after the explosion.

When the Confederates abandoned the Apalachicola River in December 1864, Chattahoochee was moved up the Chattahoochee River; she was scuttled near Columbus on 17 April 1865 to avoid capture, just as Union troops approached the city.

Chattahoochee lay underwater until 1963, when her sunken remains were found within the boundaries of Fort Benning. They later were raised and a portion of her hull and her original steam engines once more returned to her home in Columbus, where they were placed on display at the National Civil War Naval Museum. Because she was scuttled and lay submerged for a century, Chattahoochee is the only Confederate Navy gunboat that survived to the modern era.

All content from Kiddle encyclopedia articles (including the article images and facts) can be freely used under Attribution-ShareAlike license, unless stated otherwise. Cite this article:
CSS Chattahoochee Facts for Kids. Kiddle Encyclopedia.