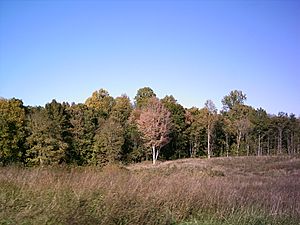 Woods on the former site of Ca Ira

Ca Ira was a small community located in Cumberland County, Virginia. Formally established in 1796, it fell into disuse in the years after the American Civil War; today, few traces of the town remain, save for the old Grace Church and a handful of houses.

At the turn of the nineteenth century, Ca Ira was a typical small farming community such as could be found in many locations around Virginia. It was formally established by the Virginia General Assembly in 1796; the origin of the name is unknown, but given the spirit of the times, and the fact that many Virginians admired the French Revolution, it is suspected to have been derived from a popular French song of the era.

Ca Ira stagnated until 1825, when the Willis River canal was completed. This served numerous purposes; it caused the removal of a pond, long the source of poor health for residents and, more importantly, it opened the town up to the tobacco trade, making it easier to transport wares along the James River between Prince Edward and Charlotte Counties and Richmond and Petersburg. Soon, a merchant class took up residence in the town. By 1836, Ca Ira could be described as a post village, with a population of 210; it had forty dwellings, three stores, a mill, a tobacco warehouse, two taverns, and a Masonic hall.

With the completion, in 1843, of Grace Church, Ca Ira had its most important and distinguished building; this not only served as a place of worship, but acted as a gathering place for members of surrounding plantations.

Good fortune was not to last, however; the town's heyday came in the middle of the 1850s, when it incorporated a bank. Its postbellum decline was rapid; the church, along with most of the rest of the town, was deserted by the end of the 19th century. A 1906 visit found little more than a "post hamlet," with only a handful of houses, a post office, two stores, and the church surviving among the ruins of warehouses and other structures. Of these, only the church exists today, although some newer houses have been erected in the vicinity.

Today, Virginia Route 632 is known as "Ca Ira Road" where it passes through the site of the former village. No other trace of the name remains.

All content from Kiddle encyclopedia articles (including the article images and facts) can be freely used under Attribution-ShareAlike license, unless stated otherwise. Cite this article:
Ca Ira, Virginia Facts for Kids. Kiddle Encyclopedia.