The California roach (Hesperoleucus symmetricus) is a cyprinid fish native to western North America and abundant in the intermittent streams throughout central California. Once considered the sole member of its genus, it has recently been split into a number of closely related species and subspecies.

Spawning occurs mainly from March through June. They move into shallow, flowing water, over bottoms covered with small rocks, and form up into schools. Females lay a few eggs at a time, eventually putting down from 250 to 900 eggs each. The adhesive eggs are laid in crevices, where they stick to the rocks, and then the males fertilize them. The fry continue to dwell in the crevices until they are strong enough to swim actively. 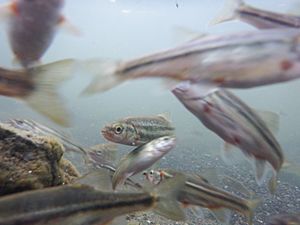 California roaches in their native habitat in Bear Creek within the Berryessa-Snow Mountain National Monument.

California roaches seem to be resilient fishes that take advantage of the intermittent waters of central California under conditions too difficult for other fishes. As the springtime streams dry up in summer, roaches accumulate in large number in pools, which may be alkaline, hot (up to 95 °F), and low in oxygen. They also seem to cope well with sewage-polluted waters.

The distribution of the species complex comprises the Sacramento River/San Joaquin River drainage, including Pit River and Goose Lake, and many of the small coastal streams (Russian River, Pajaro River, Salinas River, Adobe Creek, Permanente Creek, etc.). Populations in southern California and in Warner Valley, Oregon, may be introductions.

In a recent revision of the California roach, previously considered a single species, it was split into four distinct species and two additional subspecies:

All content from Kiddle encyclopedia articles (including the article images and facts) can be freely used under Attribution-ShareAlike license, unless stated otherwise. Cite this article:
California roach Facts for Kids. Kiddle Encyclopedia.