Cameron "Cam" Jerrell Newton (born May 11, 1989) is an American football quarterback for the New England Patriots of the National Football League (NFL). He played college football at Auburn University, where he won a BCS National Championship in 2011.

Newton was born in Savannah, Georgia to parents Cecil and Jackie Newton. His father also played professional football in the NFL. He grew up in College Park, Georgia. He attended Seaborn Lee Elementary School and then Camp Creek Middle School. In 2003, he attended Westlake High School in Fulton County, Georgia, where he played football and basketball. 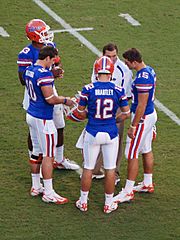 In 2007, as a freshman at the University of Florida, Newton earned the spot over fellow freshman quarterback John Brantley as the back-up for star quarterback and eventual Heisman Trophy winner Tim Tebow. He played in five games and threw for 40 yards on 5-of-10 passing and ran the ball 16 times for 103 yards and three touchdowns. In 2008, during his sophomore season, Newton played in the season opener against Hawaii. He then suffered an ankle injury and decided to take a medical redshirt season.

In January 2009, Newton transferred to Blinn College a junior college in Brenham, Texas. In fall 2009, he was quarterback for the team. The team won the 2009 NJCAA National Football Championship. Newton then wanted to transfer to a four-year college, and his father allegedly sought money from the schools competing for Newton's attendance. Newton transferred to Auburn University where he also played quarterback.

All content from Kiddle encyclopedia articles (including the article images and facts) can be freely used under Attribution-ShareAlike license, unless stated otherwise. Cite this article:
Cam Newton Facts for Kids. Kiddle Encyclopedia.