What is now Camden was established on property that was donated by Thomas Dunn in order to have a new town founded on the site. Dunn's Federal style house, built in 1825, is the oldest documented house in the town. The first county seat was in the community of Canton Bend. It was moved to Barboursville, later renamed Camden, in 1833. It had been named Barboursville in honor of United States Congressman Philip Barbour of Virginia. Incorporated in 1841, Camden was renamed by local physician John D. Caldwell in honor of his hometown of Camden, South Carolina. 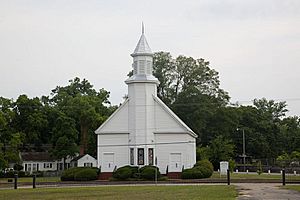 The earliest documented industries in the town were a brickyard, sawmill, and window fabricator. The Camden Phenix was the town's earliest known newspaper. It also became the home of the red-brick Greek-Revival style Wilcox Female Seminary and Female Institute, built from 1845–50. It has housed the Wilcox County Historical Society since 1976. The red-brick Greek-Revival style Wilcox County Courthouse, also listed on the National Register, was completed in 1857. It replaced an earlier wood-frame structure.

During the American Civil War, many in the community joined the Confederate cause. The county courthouse was ransacked by Union forces in 1865, but advance warning allowed county officials to remove the county records to a safe place (legend claims that they were buried in a coffin) prior to their arrival. Already devastated by the after effects of the Civil War, Camden suffered fires during 1869 and 1870 that destroyed about two-thirds of the town. The town finally began a slow recovery beginning during the 1880s, with the first bank incorporated in 1894.

Camden benefited economically during the mid-20th century with the construction of a paper mill at Yellow Bluff and of the Millers Ferry Lock and Dam, a hydroelectric dam on the Alabama River near Millers Ferry that created the William "Bill" Dannelly Reservoir.

All content from Kiddle encyclopedia articles (including the article images and facts) can be freely used under Attribution-ShareAlike license, unless stated otherwise. Cite this article:
Camden, Alabama Facts for Kids. Kiddle Encyclopedia.