Canada's Aviation Hall of Fame, based in the Reynolds-Alberta Museum in Wetaskiwin, Alberta, Canada, commemorates and honours those whose accomplishments in aviation contributed so much to Canada's development as a nation. Founded in 1973, the Hall of Fame has honoured thus far more than 200 aviators, engineers, technicians and administrators.

Due to its size and geographical location, Canada has had to rely upon aviation much more than other countries. With so much territory unsuitable for surface travel, it was up to aviation to unite the country and bring the distant regions the opportunities for social and economic progress that would make them part of Canada. The unique combination of pioneering aviation and pioneering development of the country resulted in many outstanding examples of heroism, skill, tenacity, courage, wisdom, and luck, and many great stories to be told. The best of these stories are described in the Aviation Hall of Fame.

Stories are told on four by eight foot panels with portraits, citations, photographs, and memorabilia. The Hall has an extensive collection of personal items and memorabilia related to inducted members, including such material as licenses, logbooks, uniforms, insignia, medals, trophies and awards, documents, correspondence, scrapbooks and photographs. The reference library contains approximately 2,500 books and over 12,000 periodicals related specifically to Canadian aviation. Items are loaned to other museums in Canada for exhibit purposes, and may be accessed by researchers and visitors, by appointment.

The Hall of Fame also awards the Belt of Orion and the Order of Polaris each year at its annual induction dinner, to an organization notable for its contribution to Canadian aviation. 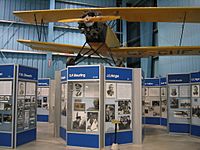 Canada's Aviation Hall of Fame was incorporated August 2, 1973. The 79 original members included all Companions of the Order of Icarus, all who had been awarded the Trans-Canada (McKee) Trophy, all recipients of the Victoria Cross in aerial combat, Alexander Graham Bell and F.W. "Casey" Baldwin for designing and building the Silver Dart, and Group Captain John Emilius Fauquier representing the Second World War RAF Bomber Command and Flight Lieutenant George Frederick "Buzz" Beurling representing the Second World War RAF Fighter Command. A confidential nomination review committee reviews nominations for new members of the Hall of Fame, looking for contributions of major benefit to Canada which have stood the test of time.

The Hall of Fame officially opened on the first day of Klondike Days, July 17, 1974, in the Sportex Building at the Edmonton Exhibition Grounds. During the initial years it moved several times until finally residing in the Edmonton Convention Centre for several years. When the Reynolds-Alberta Museum opened near Wetaskiwin, Alberta, in 1992, the Hall of Fame moved to the museum's aviation hangar, combining and merging its exhibits with the museum's extensive aviation collection.

The Hall has inducted the following people, arranged in alphabetical order, with their year of induction in parentheses. 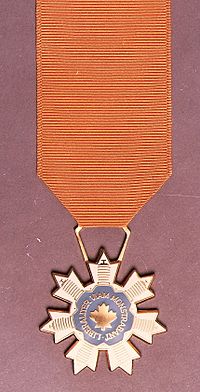 Belt of Orion Award of Excellence

The Belt of Orion Award for Excellence was founded by the Aviation Hall of Fame in 1988, to honour organizations, groups, societies or associations who have made outstanding contributions to the advancement of aviation in Canada. Recipients include:

All content from Kiddle encyclopedia articles (including the article images and facts) can be freely used under Attribution-ShareAlike license, unless stated otherwise. Cite this article:
Canada's Aviation Hall of Fame Facts for Kids. Kiddle Encyclopedia.