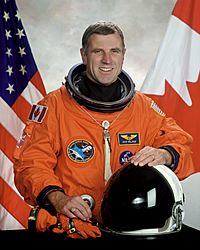 In 1998, Williams became the first non-American to hold a senior management position within NASA. He held the role of Director of the Space and Life Sciences Directorate at the Johnson Space Center and Deputy Associate Administrator of the Office of Spaceflight at NASA's headquarters.

Williams was born in Saskatoon, Saskatchewan. His father, Bill Williams, was Welsh. He is married and has three children. In 2004, he had his prostate removed after he was diagnosed with cancer.

All content from Kiddle encyclopedia articles (including the article images and facts) can be freely used under Attribution-ShareAlike license, unless stated otherwise. Cite this article:
Dafydd Williams Facts for Kids. Kiddle Encyclopedia.