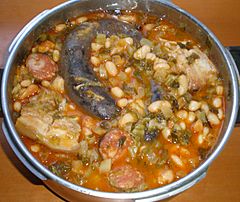 The cocido montañés, the most representative dish of Cantabrian cuisine. 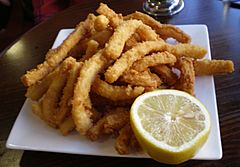 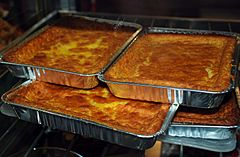 The albacore or bonito del norte is used in one of the most typical dishes of the region: marmita or sorropotún. Some of the most renowned Cantabrian dishes are hake in green sauce (merluza en salsa verde), squid with onions (maganos encebollados) and cuttlefish in its ink sauce (cachon en su tinta), and clam casserole. "Rabas" (Squid sticks deep fried) is the most popular snack in the coast, typically companied with a white wine or a vermouth.

Processed anchovies from the town of Santoña are highly appreciated and have a first class reputation worldwide.

Veal is widely consumed, often from the Tudanca cattle. The National Cattle Fair of Torrelavega, the largest cattle fair in Spain, is held in Cantabria. Game is also of high quality: deer, roe deer, and wild boar. Pork is a key element for the cocido montañés, literally 'mountain stew', with beans, cabbage, and other ingredients.

Cantabrian pastries include the traditional sobaos and quesada pasiega. Puff pastry is widely used, with different names in different regions: corbatas in Unquera and San Vicente de la Barquera, polkas in Torrelavega, and sacristanes in Liérganes. Other notables sweets are frisuelo [es]s and canónigos, both of Liébana; corazones of Liérganes, the palucos of Cabezón de la Sal; and the tortos and pantortillas of Reinosa. Other desserts not of Cantabrian origin are rice pudding, natillas, leche frita, and fruit jams.

Dairy products include Cantabrian cream cheese; picón Bejes-Tresviso in Tresviso and its neighboring town; smoked cheeses (named for specific places) such as Áliva or Pido; and the Quesucos de Liébana [es], made with a mixture of cow and sheep milk.

All content from Kiddle encyclopedia articles (including the article images and facts) can be freely used under Attribution-ShareAlike license, unless stated otherwise. Cite this article:
Cantabrian cuisine Facts for Kids. Kiddle Encyclopedia.