Canton is a city in and the county seat of Lincoln County, South Dakota, United States. Canton is located 20 minutes south of Sioux Falls in southeastern South Dakota. Canton is nestled in the rolling hills of the Sioux Valley, providing an abundance of recreational activities with the Big Sioux River bordering the eastern side, Newton Hills State Park to the south, and Lake Alvin to the north. The city was named by Norwegian settler and former legislator James M. Wahl. The population was 3,066 as of the 2020 census.

The City of Canton was the proud recipient of the South Dakota Community of the Year Award in 2004 and in 2011. The city is also home to the Canton Industrial Park, South Dakota's first Certified Ready Site. 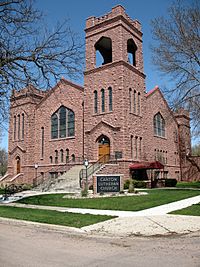 The earliest known visitor to the area was Lewis P. Hyde, who first came to the area in 1866. The first actual settler was August Linderman. By 1868, there were 35 people living in Lincoln County. The residents named the community Canton, believing the location to be the exact opposite of Canton, China. By the summer of that year, a caravan of 180 Norwegian settlers crossed the Big Sioux River to make their home in Canton. In 1880, the Chicago, Milwaukee, St. Paul and Pacific Railroad crossed the Big Sioux River to reach Canton. The city still has an active rail freight service. The city has many historical homes and buildings dating back to the late 1800s. Some notable sites include The Kennedy Mansion on Dakota Street, as well as the Historical Society House built in 1886. Lincoln County Courthouse was built in 1889, and Canton Lutheran Church was built in 1908.

Canton is part of the Sioux Falls Metropolitan Statistical Area that consists of four counties, all of which are located in South Dakota: Lincoln, McCook, Minnehaha, and Turner. The estimated population of this MSA in 2008 was 232,930, an increase of over 24% from the 2000 census. According to recent estimates, Lincoln County, which Canton is the County Seat, is the ninth fastest-growing county (by percentage) in the United States. In addition to Canton, several cities and towns included in the metropolitan area are Sioux Falls, Brandon, Dell Rapids, Tea, Harrisburg, Worthing, Beresford, Lennox, Hartford, Crooks, Baltic, Montrose, Salem, Renner, Chancellor, Colton, Humboldt, Parker, Hurley, Garretson, Sherman, Corson, and Centerville.

There were 1,248 households, of which 31.9% had children under the age of 18 living with them, 50.2% were married couples living together, 9.9% had a female householder with no husband present, 3.1% had a male householder with no wife present, and 36.8% were non-families. 32.3% of all households were made up of individuals, and 14.9% had someone living alone who was 65 years of age or older. The average household size was 2.37 and the average family size was 3.01.

In 1884, Augustana College moved from Beloit, Iowa, to Canton. An elementary through high school was also built as part of Augustana's relocation, and educated the internationally known physicist Merle Tuve, and brothers John Lawrence and Ernest Lawrence. 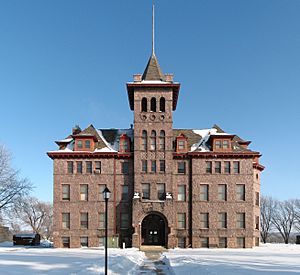 Augustana struggled in Canton until Anthony G. Tuve became president in 1890. Attendance doubled, but a series of crop failures soon followed. As a result, in 1894, the Church Synod withheld appropriations. President Tuve assumed all financial obligations in order to keep the school open. After the crisis, Augustana prospered and soon outgrew its building. The building was moved in 1901. Then, in 1902, the college added to the campus on the east side of town. A four and ½ story brick building was erected to house classrooms, a gymnasium, and chapel. The new structure was dedicated in 1903. The college continued to grow. Enrollment increased to 330 by 1918. The school became widely known for its excellence in academics and for the many scholars came for speaking engagements.

The United Norwegian Lutheran Synod had its headquarters on campus. An event in 1917 took place that changed the college and community. That year, the Norwegian Lutheran Synods merged to become the Norwegian Lutheran Church of America. The new synod considered it inadvisable to maintain Augustana College and Lutheran Normal School in Sioux Falls, barely 25 miles apart. A vigorous campaign to keep the college in Canton began. But, the advantages of locating the school in a larger community prevailed, and Canton lost their college. The bitterness was great, and was intensified when President Tuve died suddenly. The area pastors in the South Dakota district realized something needed to be done. An agreement was proposed and accepted that Canton would put up an endowment of $200,000 and turn it over to Augustana College. Then, the Normal School division would move to Canton. A fund drive was successful and the Canton Lutheran Normal School opened in the fall of 1920. The gradual transfer of the Academy division to the Canton campus was made between 1920 and 1932. The school was known as Augustana Academy in 1932 and was no longer a division of the college. Capital improvements were made to the campus through the next several years including a new gymnasium and dormitory.

The history of Augustana Academy came to an end in 1971. The campus was closed and was sold to Keystone Treatment Center. The “Old Main” building has been converted into apartments.

A young man named Ludwig Hoiby, a student at Augustana and originally from Norway, gave a skiing exhibition to a group of Canton students in 1911. This exhibition began the quest to clear the hill at the Thorson farm located on the Iowa side of the Sioux River east of Canton. In 1923 the first meet sponsored by the Sioux Valley Ski Club was held at a new location several hundred yards east of the original hill. A 250-foot scaffold and an improved takeoff were built and the Central U.S. Tournament was held the following year. On February 11 and 12, 1925, the National Tournament was held and Canton was host to over 10,000 fans. World-renowned singer, Eric Bye, presented the awards to the winners of several divisions. The winner of the "A" Division was awarded The Sioux Valley loving cup, a silver traveling trophy. Many notables were present that day including a member of the Olympic team, former national champions, and the international winner and the winner of the world distance title. Tournaments were held annually at the site and in 1930 the Club hosted the U.S. National Tournament a second time. In 1932 the U.S. Olympic Ski Jumping trials were held at the hill with Casper Oimoen winning the "A" Division. Three of the four qualifiers to the Olympics were members of the Sioux Valley Ski Club. Later that winter Oimoen would place 4th in the Olympics at Lake Placid, NY behind three Norwegian skiers. Snow was scarce in 1933 so it was trucked in 90 miles from Spirit Lake and Lake Okoboji, Iowa. By the time the snow was in place, it had turned into slush. Winds changed and brought bitter temperatures causing the slush to turn to ice so the tournament had to be cancelled. The largest crowd on record at the hill was in 1935 when the club hosted its third and final National Tournament. 15,000–20,000 people attended and out of town spectators stayed in Canton or Sioux Falls, SD hotels and in Pullman cars brought in by the railroad. The Sioux Valley Ski Club hosted its final Central U.S. Tournament in 1936. Poor attendance in 1936, cost increases and uncooperative weather prompted the club to fold the following year. Wind blew down the scaffolding in the 1940s, and in the 1960s the hill was used as a motorcycle climb. Today the site can be seen south of a South Dakota historic marker on U.S. Highway 18 two miles east of Canton.<The Sioux Valley News, Canton, SD><The Argus Leader, Sioux Falls, SD><U.S. Ski Hall of Fame, Ishpeming, MI>

The first and only institution for insane Indians in the United States was Hiawatha Asylum for Insane Indians. It was placed in Canton because of the central location among the Western states with a large Indian populations and because of the influence of South Dakota's Representative O.S. Gifford and Senator R. F. Pettigrew. In 1898, Congress passed a bill creating the institution. The bill establishing the Hiawatha Asylum for Insane Indians passed in 1899, and the Indian Appropriation Act for 1900 set aside $3,000 for land purchase and $42,000 for building construction. One hundred acres were purchased a mile east of Canton on the hills overlooking the Sioux River. The asylum was closed in 1934.

The asylum grounds and buildings were used for a short time by South Dakota as a penitentiary for first time offenders. In 1946, in what Cantonites refer to as the "second Manhattan Purchase," the city purchased for $1.00 the 337 acres and buildings of the old institution. The only stipulation of the purchases was that it be used for the welfare of the community. For a time, the asylum hospital was used for the Canton-Inwood Hospital, but today the old asylum buildings are gone. The land is now home to Sanford Hospital Canton-Inwood, Three Rivers Gun Club, the 4-H fairground and Hiawatha County Club and Golf Course.

All content from Kiddle encyclopedia articles (including the article images and facts) can be freely used under Attribution-ShareAlike license, unless stated otherwise. Cite this article:
Canton, South Dakota Facts for Kids. Kiddle Encyclopedia.