The Capital Pathway, also known informally as the Bike Path, is a 220-kilometre (140 mi) recreational pathway interlinking many parks, waterways and sites in Ottawa, Ontario and Gatineau, Quebec. Most of the pathway is paved, and allows an almost continuous route through the National Capital Region.

The pathway, was mostly the work of the National Capital Commission, a crown corporation created in 1959. The trail, which includes the Rideau Canal Pathway, the Ottawa River Pathway, and the Rideau River Pathway extends in all directions to the limits of the city of Ottawa and extends northward into Gatineau Park's lakes.

The first section built was the Ottawa River Pathway in the early 1970s.

The majority of the pathway continues to be maintained by the NCC.

The section of the Ottawa River Pathway between Acres Road and Moodie Drive was paved in 2009.

This very long pathway is along the south bank of almost the entire length Ottawa's portion of the Ottawa River. In the east it goes to the beach at Petrie Island at Tenth Line Road and the Ottawa River. Going westward, it meets up with the pathway along the Aviation parkway which is at the Aviation Museum. Further along, it becomes a part of the Trans Canada Trail / The Great Trail as it winds through Rockcliffe Park to the residence of the Prime Minister at 24 Sussex Drive and Rideau Hall the residence of the Governor General. It then passes Major's Hill Park (near the bridge) on towards the back side of Parliament Hill where it bypasses the pathways on the Rideau Canal.

Moving westward, it bypasses the War Museum in LeBreton Flats and goes to first Westboro Beach, then Brittania Beach, Moodie Drive and beyond to end at Shirleys Bay. 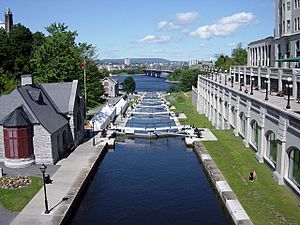 The most well known of all the sections of the Capital Pathway is the Rideau Canal section. Its downtown location attracts tourists and residents, frequently used for walking, cycling, and running. It continues to be popular in the winter, as the Rideau Canal is widely known as one of the longest skating rinks in the world, with 6 to 8 km of skatable surface on most days in January.

Its most northerly point is where the canal empties into the Ottawa River. Immediately beside the locks is the Bytown Museum. There actually are two separate paths, on each side of the canal. One encircles Dow's Lake and path users frequently cross to the other side near Carleton University, just south of the lake.

The trail extends to Hog's Back Falls which also provides a crossing. This is the point where the canal meets the Rideau river and the trail continues on its east side until Mooney's Bay Park. South of that it resumes, continuing to Ottawa's south boundary.

This pathway is almost unknown by tourists but frequented by residents. It starts at Rideau Falls where the Rideau River meets the Ottawa River. It goes southward through New Edinburgh then along Riverside Drive until it reaches Billings Bridge. Here is a park where ducks frequent.

From Billings Bridge, it continues south until it meets up with the Rideau Canal at the Hog's Back Falls. The more well known part is on the east side of the Rideau River.

Other Routes in Ottawa

Aylmer is home to an effective and generally well-maintained network of bicycle paths that encircle the central portion of the area and run past many scenic locations, such as the Aylmer Marina and the Deschênes Rapids.

The bike trail becomes very steep going northwards into Gatineau Park. Pink Lake is directly on the path. Other lakes such Kingsmere Lake are accessible. The Champlain Lookout provides a good view of lands to the west of the city of Ottawa from a high elevation.

Despite the National Capital Region having a very low crime rate, attention has been given to safety on the pathway. The pathway is dark at night, has places where traffic may be hazardous, and has been involved in the investigation of more than one homicide.

The Pathway patrol is a volunteer organization based in Ottawa, Ontario. Trained volunteer patrollers cycle, in-line skate, or walk along Ottawa's recreational pathways to promote active living, improve safety and security, and to encourage courtesy among all users. Areas patrolled span the NCC pathways in the west from Andrew Haydon Park through Britannia Park, east along the Ottawa River Pathway to Petrie Island, The Rideau Canal (downtown to Mooney's Bay), The Rideau River (Sussex Drive to Mooney's Bay) and within City of Ottawa parks in the Greenboro area.

In 2010, Kanata was added to the patrol region.

All content from Kiddle encyclopedia articles (including the article images and facts) can be freely used under Attribution-ShareAlike license, unless stated otherwise. Cite this article:
Capital Pathway Facts for Kids. Kiddle Encyclopedia.