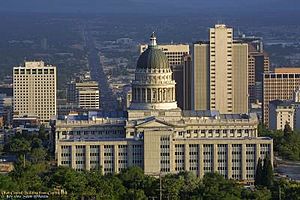 The hill slopes down to the south, overlooking downtown Salt Lake City, which is why the Utah State Capitol was built there between 1912 and 1916. State Street (U.S. Route 89 in Utah) leads up Capitol Hill, and Main Street also climbs the one block to the west. The entire Salt Lake City metro area can seen from Capitol Hill, as can the Great Salt Lake miles to the west.

The hill is home to many historic buildings. The west-sloping side of the hill is a diverse neighborhood called "Marmalade Hill", since the streets are named after various fruits that are often used in making marmalade. The east slope descends sharply into City Creek Canyon. Over the small canyon is another Salt Lake City neighborhood called "the Avenues". Above and to the north of the Capitol building is the Wasatch Springs area named after nearby natural hot springs. The sloping south face of Capitol Hill is sometimes called "Heber's Bench" after Heber C. Kimball, former resident and Apostle of The Church of Jesus Christ of Latter-day Saints.

The Marmalade District's borders are generally considered to be a small triangular area bounded by 300 North on the south, 500 North on the north, Center Street on the east, and Quince Street, the district's "Main Street", on the west.

The Capitol Hill Historic District is listed on the National Register of Historic Places.

The western slope of Capitol Hill is called the "Marmalade District" after marmalade fruit jam because of the streets named after fruit trees imported and planted there such as apricot, quince and almond. Most of the original streets of Salt Lake City are aligned to and named after cardinal directions, and exceptions to this rule are often named. The Avenues are one example. The irregular, narrow, and steep roads of the Marmalade District are another.

The district is often considered among the most architecturally diverse in Utah residential neighborhoods. Early examples of Utah vernacular architecture sit alongside diverse turn-of-the-century styles such as a Russian-influenced LDS meeting house, Gothic revival homes, Victorian mansions, and eclectic houses of various combinations of adobe, brick, and carpentry.

In the Marmalade District

From June to August each year, the Capitol Preservation Board presents "Movie Under the Stars." This is an outdoor movie series that shows different types of movies. In previous years movies such as Kung Fu Panda; My Big, Fat, Greek Wedding; Shrek the Third; Ant Bully; Iron Man; and Bedtime Stories have been shown. The movies are projected on an inflated movie screen on the south lawn of Capitol Building.

During the summer the Capitol Preservation Board also hosts Capitol Discovery Day. A day to visit and tour the State Capitol Building and enjoy games and activities. Throughout the day bands play and choirs sing inside.

All content from Kiddle encyclopedia articles (including the article images and facts) can be freely used under Attribution-ShareAlike license, unless stated otherwise. Cite this article:
Capitol Hill, Salt Lake City Facts for Kids. Kiddle Encyclopedia.