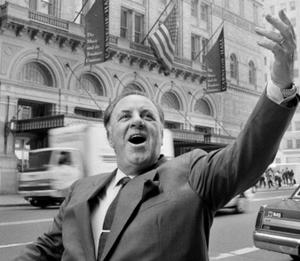 Carlo Bergonzi (July 13, 1924 – 25 July 2014) was an Italian tenor. He performed in Italian operas, especially in the works of Giuseppe Verdi. He was noted for his very good musical skills and style.

Bergonzi was born in Vidalenzo, near Parma, Italy. He studied in Parma with Grandini. His first performance was in 1948 in Lecce, as Figaro in Il Barbiere di Siviglia. For that, he sang as a baritone. After more studies, he retrained himself as a tenor. His first performance as a tenor was in 1951 in Bari, as Andrea Chenier. That same year, on the 100th anniversary of Verdi's death, he sang on Italian radio in several Verdi works, such as I Due Foscari, Giovanna d'Arco, Simon Boccanegra, etc.

He died in Milan.

All content from Kiddle encyclopedia articles (including the article images and facts) can be freely used under Attribution-ShareAlike license, unless stated otherwise. Cite this article:
Carlo Bergonzi Facts for Kids. Kiddle Encyclopedia.