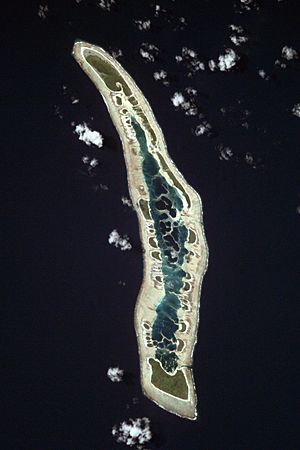 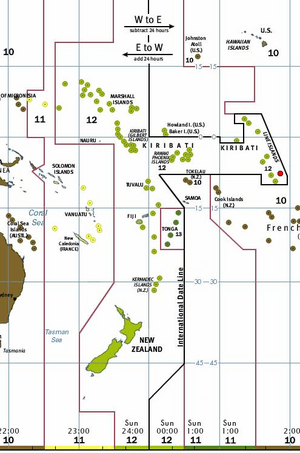 Caroline Island, or Caroline atoll, is an atoll, in the Pacific Ocean that is part of Kiribati. It is the easternomost atoll of Kiribati. The atoll is part of the Southern Line Islands. In total, the atoll consists of 39 islets(motus), which cover a surface (landmass) of about 400 hectares (990 acres). The atoll covers an area of about 24 square kilometres (9.3 sq mi)

It was first sighted by Europeans in 1606, it was claimed by the United Kingdom in 1868. It has been part of the Republic of Kiribati since the island nation's independence in 1979. Caroline Island has remained relatively untouched and is considered one of the world's most pristine tropical islands, despite guano mining, copra harvesting, and human habitation in the 19th and 20th centuries. It is home to one of the world's largest populations of the coconut crab and is an important breeding site for seabirds, most notably the sooty tern.

The atoll is currently designated as a wildlife sanctuary. In 2014 the Kiribati government established a 12-nautical-mile fishing exclusion zone around each of the southern Line Islands (Caroline (commonly called Millennium), Flint, Vostok, Malden, and Starbuck). Both Flint and wostok are about 230 kilometres (140 mi) to the west. Papeete, Thahiti is about 849 kilometres (528 mi) to the south.

In 1994, Kiribati changed the International date line, so that all of Kriibati would have the same date. This meant that Caroline atoll would be the first landmass on earth with the new date. Frr the year-2000 celebrations, the atoll was renamed Milennium island. Other names in the past have included Hirst Island, Clark Island and Independence Island.

The island is an importan breeding place for bird. The only known mammal on the atoll is a rat.

All content from Kiddle encyclopedia articles (including the article images and facts) can be freely used under Attribution-ShareAlike license, unless stated otherwise. Cite this article:
Millennium Island Facts for Kids. Kiddle Encyclopedia.