Carpenteria californica the tree anemone or bush anemone, is a species of flowering plant in the hydrangea family Hydrangeaceae. It is the sole species in the monotypic genus Carpenteria, which is closely related to the similar genus Philadelphus. It is a flowering evergreen shrub native to the Sierra Nevada foothills in California.

The genus was named in honor of Dr. William Marbury Carpenter, a noted botanist from Louisiana.

Note that Carpenteria should not be confused with the similarly spelled Carpentaria, a genus of palms native to northern Australia. 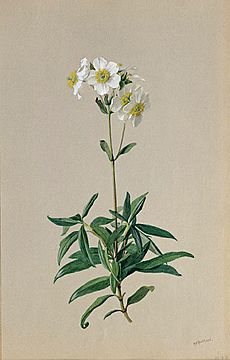 The sweetly-scented flowers are 3–7 cm (1–3 in) across with five to eight pure white petals and a cluster of yellow stamens. It flowers from late spring to midsummer. The fruit is a leathery capsule 6–12 mm (0.24–0.47 in) in diameter, containing numerous seeds.

The bush anemone is a rare species, endemic to only seven sites in Fresno and Madera Counties, where it grows in chaparral and oak woodlands at 340–1,340 m (1,115–4,396 ft) altitude, between the San Joaquin River and Kings River. It is well adapted to wildfire, reproducing by stump sprouts after burning. Natural seedlings are rare.

Carpenteria californica is cultivated as an ornamental plant, grown for its lush foliage, large scented flowers and drought tolerance. It is used in traditional and wildlife gardens in subtropical and temperate locations in the northern hemisphere. It is hardy down to −10 °C (14 °F) in sheltered locations in full sun.

It has been in cultivation since 1875, and is now much more common in gardens than in its natural habitat. It first flowered in England for the famed plantswoman Gertrude Jekyll at Godalming in 1885.

The cultivars ‘Elizabeth’ and ‘Bodnant’ have gained the Royal Horticultural Society’s Award of Garden Merit.

All content from Kiddle encyclopedia articles (including the article images and facts) can be freely used under Attribution-ShareAlike license, unless stated otherwise. Cite this article:
Carpenteria Facts for Kids. Kiddle Encyclopedia.