The California interior chaparral and woodlands ecoregion covers 24,900 square miles (64,000 km2) in an elliptical ring around the California Central Valley. It occurs on hills and mountains ranging from 300 feet (91 m) to 3,000 feet (910 m). It is part of the Mediterranean forests, woodlands, and scrub biome, with cool, wet winters and hot, dry summers. Many plant and animal species in this ecoregion are adapted to periodic fire.

The California interior chaparral and woodlands ecoregion extends from as far north as Shasta Lake in Northern California to as far south as the Santa Barbara Channel in Southern California.

Despite being termed as "inland", this ecoregion features extensive coastline between the Central Coast towns of Goleta and San Simeon, as well as within the Monterey and San Francisco Bay areas. These coastal regions are broken up by isolated patches of Northern California coastal forests and California montane chaparral and woodlands, which inhabit the higher elevation Santa Cruz and Santa Lucia Mountains, respectively. 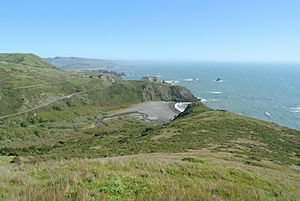 Chaparral and oak woodlands are the most widespread plant communities in this ecoregion. The chaparral is composed of diverse shrubs and herbs. These include chamise and several species of manzanita and ceanothus. Gray pine often emerges from the shrubs. Meanwhile, buckeye is extensive and Blue oak is one of the most extensive of the many varieties of oak in the woodlands: scrub oak, coast live oak, canyon live oak, valley oak, and interior live oak.

The pine and cypress communities on the areas of serpentine soil within this ecoregion harbor many endemic species such as milkwort jewelflower. The main trees of this habitat are Sargent cypress and MacNab cypress with California scrub oak.

Over seventy species of mammals occur in this rich ecoregion. The endemic mammals include three species of kangaroo rat. Some hundred species of birds occur here. Indicator species are scrub jays, acorn woodpeckers, and wrentits.

About one third of the original habitat remains, especially at higher elevations. The trees of Closed-cone pine forest are adapted to open the cones and release seeds for new growth following the heat of forest fires. As fire regulation and suppression becomes more effective these communities cannot renew themselves.

All content from Kiddle encyclopedia articles (including the article images and facts) can be freely used under Attribution-ShareAlike license, unless stated otherwise. Cite this article:
California interior chaparral and woodlands Facts for Kids. Kiddle Encyclopedia.