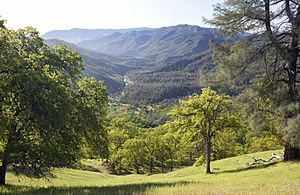 Cache Creek Wilderness is within the new National Monument 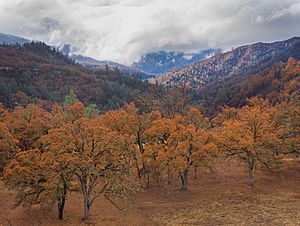 The national monument was created by a proclamation issued on July 10, 2015 by President Barack Obama under the Antiquities Act. Obama also signed proclamations creating two other national monuments (the Basin and Range National Monument in Nevada and the Waco Mammoth National Monument in central Texas) the same day. The monument will be jointly managed by the Mendocino National Forest of the U.S. Forest Service and the Bureau of Land Management

The proclamation of Berryessa Snow Mountain National Monument came after a campaign for the area's designation, supported by a coalition of counties and cities in the region (many of which passed resolutions of support), the California State Legislature, the Elem Indian Colony of Pomo Indians, state and local political leaders, local newspaper editorial boards, conservationist and environmental organizations, recreation groups, local business owners and landowners.

The monument extends approximately 100 miles (160 km) from Mendocino County to mountains on either side of Lake Berryessa in Yolo and Napa counties. The monument includes the Snow Mountain, Cache Creek and the Cedar Roughs Wilderness areas. The monument, along with the lake, take their name from the Berryessa family of California, a historically prominent Californio family of the Bay Area.

Lake Berryessa itself was not included within the monument's boundaries due to critics' concerns over the possibility that the use of motorized boats, watercraft and Jet Skis could be restricted at some point in the future.

The area has cultural and historical, as well as ecological, significance. The region has been inhabited by linguistically diverse Native American tribes for 11,000 years — including the Yuki, Nomlaki, Patwin, Pomo, Huchnom, Wappo, Lake Miwok and Wintum indigenous peoples.

All content from Kiddle encyclopedia articles (including the article images and facts) can be freely used under Attribution-ShareAlike license, unless stated otherwise. Cite this article:
Berryessa Snow Mountain National Monument Facts for Kids. Kiddle Encyclopedia.