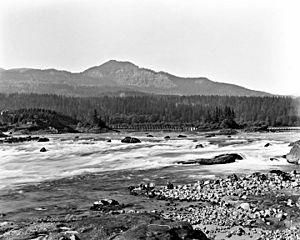 Cascades Rapids. Greenleaf Peak and Red Bluffs are visible in the background. 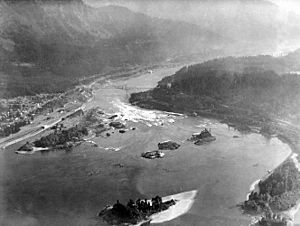 The Cascades Rapids (sometimes called Cascade Falls or Cascades of the Columbia) were an area of rapids along North America's Columbia River, between the U.S. states of Washington and Oregon. Through a stretch approximately 150 yards (140 m) wide, the river dropped about 40 feet (12 m) in 2 miles (3.2 km). These rapids or cascades, along with the many cascades along the Columbia River Gorge in this area of Oregon and Washington, gave rise to the name for the surrounding mountains: the Cascade Range.

In 1896 the Cascade Locks and Canal were constructed to bypass the rapids. In the late 1930s, the construction of the Bonneville Dam led to the submerging of the rapids and most of the 1896 structures.

The rapids were an important fishing site for Native Americans, who would catch salmon as they swam upriver to spawn. 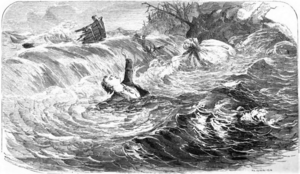 "Wrecked in the rapids": Frances Fuller Victor recounted a tale of a family whose boat wrecked during the emigration of 1843 in Eleven years in the Rocky Mountains and a life on the frontier/Chapter 26.

They also posed a major obstacle to the development of the Oregon Trail; initially, pioneers would gather at The Dalles to await small boats to carry them to the Willamette Valley; in 1845, Sam Barlow and his associates built a road around the south side of Mount Hood, which allowed travelers along the Trail to bypass the rapids on the last leg of their journeys.

Boat travelers were required to either portage boats and supplies or pull boats up with ropes.

Conflicts continued thereafter between the Chinookan natives and Europeans and Americans, who generally refused to recognize the natives' authority over passage through the area. By 1813–14, fur traders passing through were resorting to violent force against the Indians. Although more diplomatic approaches eventually prevailed, a malaria outbreak in the 1830s so reduced the populations of the Cascade and other Indian tribes, that they ceased to be a powerful force along the river.

However, three forts, Fort Cascades, Fort Raines and Fort Lugenbeel were constructed between present day Stevenson, Washington and North Bonneville over 1855–6 to protect the portage road around the rapids. Natives burned Fort Cascades in 1856, but it was rebuilt. This attack prompted the construction of Fort Lugenbeel. 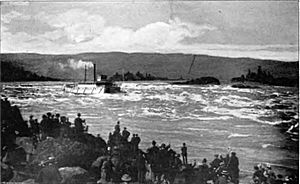 Sternwheeler Hassalo running the Cascades of the Columbia, May 26, 1888

The Cascades were a significant barrier to river navigation. Steamboats could not go upriver through the rapids, and could be brought downriver only at great risk, although this was done a number of times by highly skilled captains. A canal and lock around the rapids was completed in 1896 at what is now Cascade Locks, Oregon. By 1938 the rapids were gone, submerged under the Bonneville Reservoir as it formed behind Bonneville Dam. Bonneville Lock at the dam, completed in 1937, replaced the old Cascade Locks around the rapids.

All content from Kiddle encyclopedia articles (including the article images and facts) can be freely used under Attribution-ShareAlike license, unless stated otherwise. Cite this article:
Cascades Rapids Facts for Kids. Kiddle Encyclopedia.