Kids Encyclopedia Facts
This article is about Cascade Locks and Canal. For other uses, see Cascade Locks, Oregon (disambiguation). 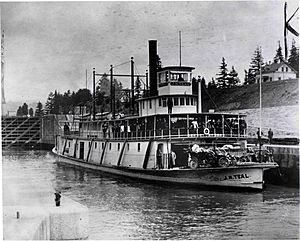 Cascade Locks is a city in Hood River County, Oregon, United States. The city took its name from a set of locks built to improve navigation past the Cascades Rapids of the Columbia River. The U.S. federal government approved the plan for the locks in 1875, construction began in 1878, and the locks were completed on November 5, 1896. The locks were subsequently submerged in 1938, replaced by Bonneville Lock and Dam, although the city lost no land from the expansion of Lake Bonneville behind the dam some 4 miles (6 km) downstream of the city. The city population was 1,144 at the 2010 census. 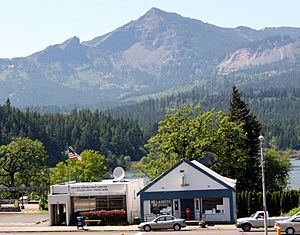 Post office in Cascade Locks, with the Columbia River in the background

Since 1999, the Confederated Tribes of Warm Springs have been pursuing an off-reservation casino to be sited in Cascade Locks. Since 2008, city officials have been pursuing an arrangement that would allow them to trade city well water for state-owned spring water and to sell it to Nestlé for bottling. In May 2016, Hood River County voters voted over 65% in favor to stop the project permanently.

This region experiences warm (but not hot) and dry summers, with no average monthly temperatures above 71.6 °F (22.0 °C). According to the Köppen climate classification system, Cascade Locks has a warm-summer Mediterranean climate, abbreviated "Csb" on climate maps. The city receives an average of 76.27 in (1,937 mm) of precipitation per year.

There were 445 households, of which 30.3% had children under the age of 18 living with them, 47.2% were married couples living together, 13.7% had a female householder with no husband present, 7.6% had a male householder with no wife present, and 31.5% were non-families. 21.6% of all households were made up of individuals, and 7.4% had someone living alone who was 65 years of age or older. The average household size was 2.57 and the average family size was 2.95.

US 30 runs through the city, and can be accessed by exit 44 from I-84. The Bridge of the Gods connects Cascade Locks to Washington State Route 14.

All content from Kiddle encyclopedia articles (including the article images and facts) can be freely used under Attribution-ShareAlike license, unless stated otherwise. Cite this article:
Cascade Locks, Oregon Facts for Kids. Kiddle Encyclopedia.