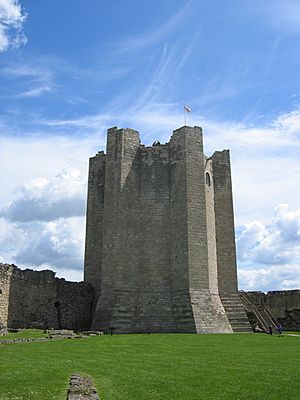 The keep of Conisbrough Castle

While there are many castles in South Yorkshire, the majority are manor houses and motte-and-bailey which were commonly found in England after the Norman Conquest.

Beighton is now a suburb of Sheffield, but in the mediaeval period lay just over the county boundary in Derbyshire. Its castle is known only from a single thirteenth century reference to "the tower of the former castle", and its location is not known with certainty. However, the Enclosure Plan for the village and a plan made in 1792 indicate a site by the River Rother, which may have formed a moat. 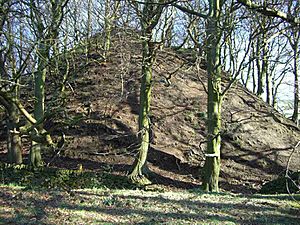 Bradfield lies north west of Sheffield. Two sites in the village have been identified with castles. Bailey Hill is a 60-foot-high (18 m) motte, and an eighteenth-century excavation found stonework, suggesting that its castle may have been rebuilt in stone. Its bailey covered three-quarters of an acre, and its surrounding ditch and rampart still stand up to 30 feet (9.1 m) high. The village grew up around this castle, which was dependent on Sheffield Castle. The site is a scheduled ancient monument.

Nearby Castle Hill has been variously identified as a ringwork, a natural look-out point, or a siege work. The hill, which could possibly be a motte, has been quarried, although one source suggests remains of a keep were visible in 1819.

Conisbrough Castle dates from the twelfth-century castle. Its remains are dominated by the 100 ft (30 m) high circular keep, which is supported by six buttresses. In the mid-1990s, the keep was restored, with a wooden roof and two floors being rebuilt. The building is considered one of South Yorkshire's primary tourist attractions, and sees in excess of 35,000 visitors per year.

Doncaster Castle lay on the site of the town's Roman fort, beside the River Don. It stood on a motte, which lies under the east end of St George's Minster. The motte was surrounded by a 16-foot (4.9 m) deep ditch, 30 feet (9.1 m) wide, which later marked the bounds of St George's churchyard. The castle was demolished, probably in the twelfth century, and there are no visible remains.

Hickleton lies west of Doncaster. Its castle was a motte and bailey, known from a seventeenth-century sketch of the motte made by Roger Dodsworth. The site was subsequently destroyed by quarrying, and no remains are visible.

Kimberworth lies west of Rotherham. Its wooden castle was a motte and bailey, dependent on Tickhill Castle. The motte survives, but there is no visible evidence of the bailey, and the castle was never rebuilt in stone. The site is a scheduled ancient monument.

Laughton-en-le-Morthen lies south east of Rotherham. Laughton Castle was a motte and bailey dependent on Tickhill Castle, and was probably built on the site of a hall owned by Edwin, Earl of Mercia. The motte survives, as does a ditch surrounding the bailey. The castle was probably originally built by Roger de Busli, and may predate his castle at Tickhill. The site is a scheduled ancient monument.

Langthwaite lay north of Doncaster. The village is now abandoned, but the site of the castle lies near Adwick-le-Street. The castle was a motte and bailey. The motte survives, reduced in height, while a 40-foot (12 m) wide ditch marks the outline of the bailey. The site is a scheduled ancient monument.

Mexborough lies north of Rotherham. Its wooden castle was a motte and bailey, dependent on Tickhill Castle. The motte and earthworks of the bailey survive in a public park (Castle Hills Park) and so are freely accessible during daylight hours. The castle was never rebuilt in stone. Although reduced in size, the motte stands 52 feet (16 m) high, and is surrounded by a six-foot bank and a 50 ft (15 m) wide ditch. The site is a scheduled ancient monument.

The first Sheffield Castle was a wooden motte and bailey type, built for William de Lovetot in the early twelfth century. The first castle was destroyed during the Second Barons' War in 1266, along with the rest of the town, and was replaced by a larger stone castle in 1270. The castle was badly damaged in the English Civil War and largely demolished in 1648.

Skellow lies north west of Doncaster. Its castle was a motte and bailey. The motte survives in the grounds of Skellow Hall, and part of the earthworks of the bailey can be seen in a field to the north. The site was reused during the English Civil War, and is now known as Cromwell's Batteries. The site is a scheduled ancient monument. 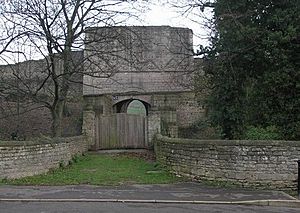 Tickhill Castle was a prominent stronghold in the reign of King John I of England. 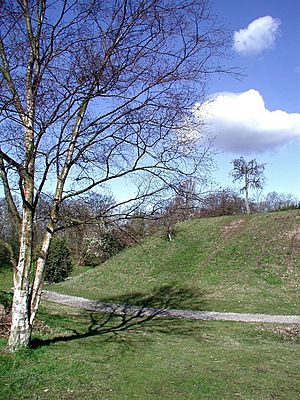 The motte of Thorne Castle

Thorne lies north east of Doncaster. Its castle was a motte and bailey dependent on Conisbrough. The motte survives, now known as Peel Hill. A ditch around the motte also survives, and a few wall fragments have been found. The castle may have also acted as a hunting lodge for Hatfield Chase. The tower, built of masonry, survived at least until the fifteenth century, when John Leland wrote that "by the church garth of Thorne is a praty pile or castelet, well diked, now used for a prison for offenders in the forestes". The foundations were largely removed in the 1820s. The site is now a scheduled ancient monument.

Houndhill in Worsbrough, Barnsley. The house has two sides of mediaeval fortification walls remaining along with two of the original four turrets. The fortified manor house was defended by fifty men-at arms during the English Civil War. The house still remains in the hands of the Elmhirst family who owned it at the time of the civil war. 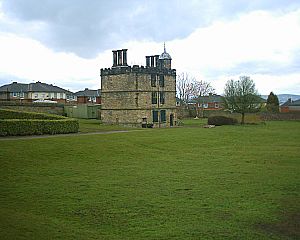 The Turret House at Manor Lodge 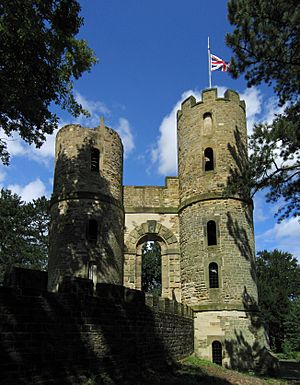 Stainborough Castle, in the grounds of Wentworth Castle, is a folly built from 1726 and inscribed "Rebuilt in 1730". It missed by only a few years being the first sham castle in an English landscape garden.

Wentworth Castle, near Barnsley, is a former stately home, the seat of the recreated Earls of Strafford.

All content from Kiddle encyclopedia articles (including the article images and facts) can be freely used under Attribution-ShareAlike license, unless stated otherwise. Cite this article:
Castles in South Yorkshire Facts for Kids. Kiddle Encyclopedia.