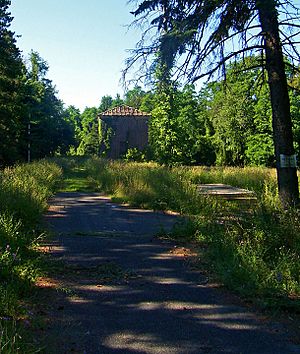 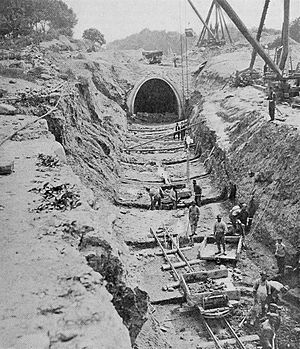 The Catskill Aqueduct, part of the New York City water supply system, brings water from the Catskill Mountains to Yonkers where it connects to other parts of the system.

The Catskill Aqueduct begins at the Ashokan Reservoir in Olivebridge, New York, located in Ulster County. From the Ashokan Reservoir, the aqueduct traverses in a southeasterly direction through Ulster, Orange, and Putnam counties. It tunnels first beneath the Rondout Valley and Rondout Creek in the town of Marbletown, then beneath the Wallkill River in the town of Gardiner in Ulster County before flowing toward Orange County, New York. It crosses 1,100 feet (340 m) below the Hudson River bed at Storm King Mountain in Orange County before reaching Putnam County on the east side of the river at Breakneck Mountain. The aqueduct transports water from Ashokan as well as the Schoharie Reservoir, which feeds into Ashokan.

All content from Kiddle encyclopedia articles (including the article images and facts) can be freely used under Attribution-ShareAlike license, unless stated otherwise. Cite this article:
Catskill Aqueduct Facts for Kids. Kiddle Encyclopedia.