Cawsand (Cornish: Porthbugh) and Kingsand are twin villages in southeast Cornwall, England, United Kingdom. The village is situated on the Rame Peninsula and is in the parish of Maker-with-Rame.

Cawsand overlooks Plymouth Sound and adjoins Kingsand, formerly on the border of Devon and Cornwall (the border has since been moved and now is situated on the River Tamar). Cawsand has one public house: the Cross Keys Inn.

Cawsand is within Mount Edgcumbe Country Park. There are frequent bus services to the city of Plymouth which is three miles to the north across Plymouth Sound. There is also a ferry service in the summer (from Cawsand beach to Plymouth Hoe) and a pilot gig club (Rame Gig Club).

The Rame Peninsula is considered part of the Forgotten Corner of Cornwall.

Cawsand is the site of an extinct volcano system. Bentonite clay at Sandway Beach was formed from ash erupted from the volcano around 280 million years ago.

Correspondence from 1801 to 1803 shows that Admiral Nelson has stayed in Cawsand and it is rumoured that he had dined at the Ship Inn, which burned down in 2013 after several years of abandonment. The site has been cleared and is now being rebuilt by The Peninsula Trust which plans to turn the site into a cafe and affordable housing.

St Andrew's Mission Church was built in the village in 1877–78. It is a Grade II listed building. 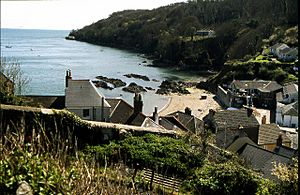 Cawsand is twinned with Porspoder in Brittany, France.

All content from Kiddle encyclopedia articles (including the article images and facts) can be freely used under Attribution-ShareAlike license, unless stated otherwise. Cite this article:
Cawsand Facts for Kids. Kiddle Encyclopedia.