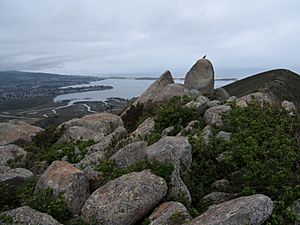 Cerro Cabrillo is one of the Nine Sisters, a group of nine volcanic landmarks in the area. Others include Morro Rock and Hollister Peak. It is named after Juan Rodríguez Cabrillo, a Spanish maritime explorer, who was sailing off the coast in 1542.

The rock outcrop, composed mostly of rhyodacite, is a volcanic plug formed when magma welled up underneath a layer of softer rock and solidified. The softer overlying rock has since eroded away, leaving a distinct, rugged shape. On its east face is a rock formation named Tiki Rock, because of its resemblance to a Polynesian Tiki carving.

The slopes and peak of Cerro Cabrillo are popular with hikers and rock climbers, with trailheads in Morro Bay State Park.

View from the top of Cerro Cabrillo.

All content from Kiddle encyclopedia articles (including the article images and facts) can be freely used under Attribution-ShareAlike license, unless stated otherwise. Cite this article:
Cerro Cabrillo Facts for Kids. Kiddle Encyclopedia.