Chaenactis carphoclinia is a species of flowering plant in the daisy family known by the common name pebble pincushion. It is native to the southwestern United States and northwestern Mexico, where it grows in rocky and gravelly habitat, such as the California deserts. The species is found in southern California, Nevada, Utah, Arizona, southwestern New Mexico, Baja California, Sonora.

Chaenactis carphoclinia, or pebble pincushion, is an annual herb growing an erect, branching stem up to about 60 centimeters (2 feet) in maximum height. The longest leaves are about 10 centimeters (4 inches) long and are usually divided into a few lobes. The inflorescence bears a few flower heads, each up to a centimeter wide. The head is lined with flat, sharp-pointed phyllaries which are reddish. The head contains several white or pink-tinted flowers with long, protruding anthers. The fruit is an achene a few millimeters in length tipped with a scaly pappus. 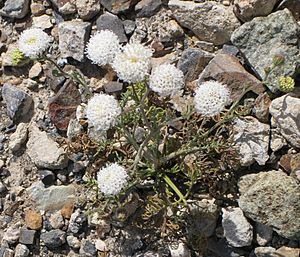 All content from Kiddle encyclopedia articles (including the article images and facts) can be freely used under Attribution-ShareAlike license, unless stated otherwise. Cite this article:
Chaenactis carphoclinia Facts for Kids. Kiddle Encyclopedia.