Chaenactis douglasii is a North American species of flowering plant in the daisy family known by the common name Douglas' dustymaiden.

The plant is found in western Canada and the western United States from British Columbia to Saskatchewan, and south to California to New Mexico, with a few isolated populations in Nebraska and the Dakotas. It grows in a wide variety of habitats, including harsh environments such as rock fields in alpine climates in the Sierra Nevada, east of the crest of the Cascade Range of Washington and Oregon, scrubland and desert, and disturbed areas such as roadsides. Distributed over a wide range of elevations, 0–3,962 m (0–13,000 ft), it is found most often between 1,800–2,400 m (6,000–8,000 ft). 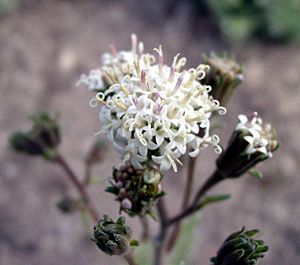 The flower head is discoid with 50 to 70 white or pinkish disk flowers.

Chaenactis douglasii is a variable herb, generally a perennial. It grows erect to 10–60 cm (4–24 in), with one to many stems coated in cobwebby hairs. The woolly or hairy leaves may be up to 15 cm (6 in) long and are divided intricately into many lobes with curled or twisted tips. Stem leaves become smaller and stalkless upwards.

The inflorescence produces one or more flower heads, each up to about 2 cm (0.8 in) long. The flower head is lined with flat, glandular, blunt-pointed phyllaries and contains several white or pinkish tubular flowers with protruding anthers.

The fruit is an achene about 1 cm (0.4 in) long including its pappus of scales.

Some Plateau Indian tribes used this plant as a dressing for burns, wounds, and sores.

All content from Kiddle encyclopedia articles (including the article images and facts) can be freely used under Attribution-ShareAlike license, unless stated otherwise. Cite this article:
Chaenactis douglasii Facts for Kids. Kiddle Encyclopedia.