Chain of Ponds is a small town near Adelaide, South Australia. It is located in the Adelaide Hills Council local government area.

The settlement was established by the South Australia Company. First settled early in the 1840s, the township was laid out after the opening of the North East Road in the 1850s. By this time, the town was reported to include two post office buildings, institute, church, service station, a handful of cottages and the old Morning Star Hotel.

There was also a nearby township called Millbrook, but it was demolished to make way for the Millbrook Reservoir, which was constructed between 1914 and 1918 to control the flow of the upper Torrens River and supply the eastern suburbs of Adelaide from an appropriate elevation. In the 1970s, Chain of Ponds was also demolished to safeguard against water pollution in the reservoir.

Little more than a cemetery exists as a reminder of Chain of Ponds, though it appears on maps as a navigation point. 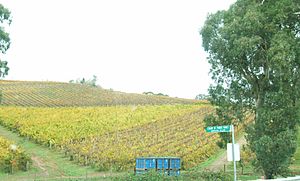 Winery at Chain of Ponds.

Chain of Ponds is located between Inglewood and Gumeracha along the Adelaide-Mannum Road, and south of Kersbrook along the Little Para Road.

The few remaining residents are served by facilities in Inglewood. The Millbrook reservoir has a capacity of 16,500 megalitres.

All content from Kiddle encyclopedia articles (including the article images and facts) can be freely used under Attribution-ShareAlike license, unless stated otherwise. Cite this article:
Chain of Ponds, South Australia Facts for Kids. Kiddle Encyclopedia.